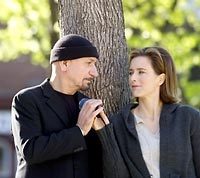 This week at the movies, Ben Kingsley is funnier than Robin Williams. Does this mean that the world has gone all topsy-turvy, and next we'll see Adam Sandler starring in a subtle art-house film about coming of age in a small French village?

More likely, it just means that "You Kill Me" is one of your better new-release bets at the cinemas during this holiday week. An unpredictable, enjoyable mob comedy from director John Dahl ("Red Rock West," "The Last Seduction") and scripted by Christopher Markus and Stephen McFeely ("The Chronicles of Narnia: The Lion, the Witch and the Wardrobe"), it's the story of Frank (Kingsley), a hit man for the Polish mob in Buffalo. He likes his work, but a fondness for booze is getting in the way. After vodka causes him to sleep through a planned hit, he's banished to San Francisco by his bosses — to join AA, get dry and start over.

Though the taciturn Frank isn't entirely thrilled by AA (it's "a little talky," he growls) or by his new job in a funeral parlor, San Francisco does come with a bonus: blue-eyed Laurel (Téa Leoni), who just might be the woman of his dreams. Is she bothered that Frank, once he gets sober, plans to return to life as a hit man? "Nobody's perfect, Frank," she reasons, her tone drier than his latest drink.

It's the unexpected teaming of Kingsley and Leoni that makes this movie work; though the supporting cast (particularly gravel-voiced Phillip Baker Hall) is fine and the film's pace sprightly. (There are a few generic mob-movie stretches, though, in the Buffalo scenes.) Kingsley, a brilliant dramatic actor, isn't exactly known for his comedy stylings, and the fun here is the way his lines seem to ramble out of him, as if he's just as surprised as we are. "I didn't know I'm an alcoholic until recently. I'm from Buffalo," he says, as if the city would explain it, and he seems a bit taken aback by the revelation. Frank's accustomed to keeping to himself, and his uncomfortable immersion in the shared culture of AA (the ritual greeting "Hi, Frank!" really startles him at first) is tentative and often very funny.

Leoni, a rarely glimpsed but always welcome sight in movies these days, is a marvelous screwball comedian, and she lightens Frank — and "You Kill Me" — with her character's what-the-heck sardonic cheer. She can spin out a line like a fishing pole and reel in helpless laughter: At the funeral home, wondering wryly whether Frank ever gets romantic with the corpses, she says, "I've heard of some people in your position, you know, making do," letting the last phrase dangle enticingly in the breeze she creates. She and Kingsley are an inspired pairing; in this odd little movie, they create their own offbeat jazz.

92 minutes. Rated R for language and some violence.