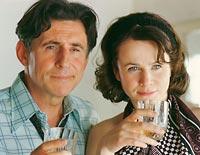 Actor Richard E. Grant ("Withnail & I") lived an unusual childhood: He and his troubled parents were among the last British colonial families living in Swaziland prior to the country's independence. In his appealing writing/directing debut, "Wah-Wah," which Grant describes as "semi-autobiographical," we follow the coming-of-age of a gangly teen named Ralph (played first by Zachary Fox, then Nicholas Hoult) whose life has enough drama for a miniseries.

The film begins with a preadolescent Ralph watching his mother, Lauren (Miranda Richardson), have sex in a car with a friend's father. His mother then abandons the family, leaving young Ralph to sadly sniff a stray glass bearing the imprint of her lipstick. He's sent to boarding school; upon his return, he finds his father, Harry (Gabriel Bryne), has married a brash American named Ruby (Emily Watson). Soon, Harry's alcoholism reaches dangerous levels, Ruby's struggle to fit in with a snobbish community becomes overwhelming, Lauren reappears after a long absence and young Ralph feels increasingly like a misfit.

Meanwhile, the racial and political tensions in Swaziland get short shrift — as, perhaps, in a teenager's self-absorbed life, they well might.

Grant's elegant film (beautifully shot by cinematographer Pierre Aïm) sometimes seems a bit familiar; it's hard to find something new in the coming-of-age genre, even in such an exotic setting. But the actors give it a spark, and Grant directs his fine cast with sureness.

Byrne's sodden, heartbroken cuckold of a father is the best work he's done in some time, while Hoult's gangly misfit (this young actor, from "About a Boy," seems to specialize in playing oddballs) quietly carries the film. Watson, impeccably delivering a flat American accent, is a clear-eyed charmer as the stepmother; Richardson (always clad in white, like an angel or ghost) is her opposite, a quietly smoking enigma. The wonderful Fenella Woolgar ("Bright Young Things") steals the film in a too-small role as a neighbor; she's got a lit-up quality, burbling out her lines as if she just might pop.

As the film builds to its touching ending, the performances grow on you: Grant has created a community of people about whose fates we care. It's a promising debut, from an actor with talent on both sides of the camera.