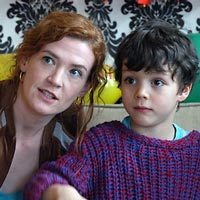 Fredi M. Murer's sweet-natured Swiss film, runner-up for best film at the Seattle International Film Festival earlier this summer, is the story of a child's dream and a parent's hopes, and what happens when these don't overlap. It's a simple, gentle tale that pulls its audience in almost imperceptibly; by its end, you just might be blinking away unexpected tears.

Its central conflict is a familiar one. Young Vitus (played at 6 by wide-eyed Fabrizio Borsani, then at 12 by Teo Gheorghiu) is a piano prodigy who dreams of flying and of his pretty baby-sitter. His mother (Julika Jenkins), however, wants him on the concert stage; overprotective, she tries to prevent him from playing outdoors with his beloved grandfather (Bruno Ganz), saying that he might hurt his hands. Taking Vitus to a renowned piano teacher, she's agitated when he's silent at the keyboard. "Come on, Vitus, play," she urges. "Why is it always for you?" the boy replies.

After a series of machinations (some predictable, some less so), Vitus and his family eventually learn that music truly does come from the heart. The classical piano score throughout is varied and lovely; much of it played by young Gheorghiu, who's clearly something of a prodigy himself. But "Vitus" gradually becomes less about music and more about connections, about a young boy's figuring out his identity and learning to soar on his own terms. Early on, we see him trying to fly in his grandfather's green yard, happily waving cardboard wings; later, he takes to the skies as an actual pilot, following his star. And to what destination does he fly? See "Vitus" and find out; for the young man he is becoming, it's a roundabout journey home.