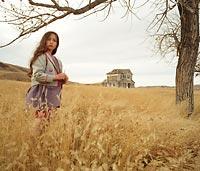 Jodelle Ferland plays a little girl with junkie parents and creepy neighbors who escapes to a fantasy world. (THINKFILM)
By Jeff Shannon
Special to The Seattle Times

Terry Gilliam begins "Tideland" with an amusingly ominous introduction, urging us to return, as he did, to a state of childlike innocence to best appreciate what is surely the most daring film of his maverick career.

Just as surely, "Tideland" will be misunderstood by those who fail to heed Gilliam's advice, since innocent perspective is essential to grasping what Gilliam aptly describes as "Alice in Wonderland" meets "Psycho." Unfortunately, the shield of innocence won't entirely protect viewers from this two-hour slog through a nightmarish childhood.

Jeliza-Rose (played by precocious 9-year-old Jodelle Ferland) is a bright girl with junkie parents (Jeff Bridges, Jennifer Tilly). She prepares their fixes the way a child would serve warm milk to an ailing relative. Mom ODs amid garish decrepitude, and dad Noah follows suit shortly thereafter, but not before transplanting Jeliza-Rose to the abandoned, ramshackle home of his youth, located in the grassy expanse of Texas (inspired by Andrew Wyeth's painting "Christina's World" and, for this Canadian co-production, filmed in Saskatchewan).

It's here, with her dad decomposing in an easy chair, that Jeliza-Rose's imagination goes into Alice-like overdrive, constructing a fantasy-escape of perpetual playtime where squirrels talk, severed doll-heads are best friends, and Gilliam's spin on Lewis Carroll becomes an unsettling tour of internal and external grotesqueries.

Noah's past continues to haunt the terrain in the form of neighbors so eccentrically gothic they might've leapt from a Gahan Wilson cartoon. Dell (Janet McTeer) is a demented graduate of the Norman Bates school of taxidermy, while younger brother Dickens (Brendan Fletcher) is the spasmodic man-child product of sexual abuse and brain surgery, attracted to Jeliza-Rose in a manner that Gilliam handles with borderline discretion.

"Tideland" arguably represents the most uncompromised expression of Gilliam's directorial vision. It was filmed — in 50 days on a $12 million budget during a delay in the filming of Gilliam's underappreciated "The Brothers Grimm" — with the creative freedom that's eluded Gilliam throughout his career. Sadly, that liberty has resulted in a plodding film that no amount of impeccable craftsmanship can fully redeem.

And yet, this Gilliam fan feels compelled to defend it. Gilliam and collaborator Tony Grisoni have jettisoned the first-person framework of Mitch Cullin's acclaimed novel, but otherwise this is a loyal adaptation that won Cullin's approval. "Tideland" is difficult because its horrors curtail the Gilliamesque whimsy of "Brazil" and "The Fisher King," but it's firmly in league with "Paperhouse" and "The Butcher Boy," which also (and more effectively) dealt with the trauma of unbearable childhoods.

All three films are honest, unflinching and worthy of reappraisal. Like the others, "Tideland" will be debated for many years to come.

"Tideland," with Jodelle Ferland, Brendan Fletcher, Janet McTeer, Jeff Bridges, Jennifer Tilly. Directed by Terry Gilliam, from a screenplay by Gilliam and Tony Grisoni, based on a novel by Mitch Cullin. 120 minutes. Rated R for disturbing content, drug use, some language. Varsity.