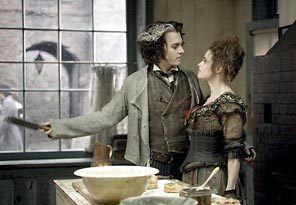 If Tim Burton hadn't existed, Stephen Sondheim would have had to invent him. The "Edward Scissorhands" filmmaker's dark vision fits so perfectly with the anguished, bloody yet hauntingly beautiful world created by Sondheim and Hugh Wheeler for their Tony-winning stage musical, it's as if Burton was born to direct it. Those who know "Sweeney Todd" can stop holding their breath; this film version (intelligently adapted for the screen by John Logan) is first-rate. Those who don't know it may find their breath taken away, because this is a musical unlike those you've ever seen before.

(Everyone knows now that "Sweeney Todd" is a musical, right? Nobody's going to freak out when they go to the cinema and Johnny Depp starts singing, right? Those who have a problem with Movies In Which People Suddenly Burst Into Song, In A Manner Entirely Unlike Real Life have stopped reading already, yes? Good. Let's go on.)

Based on a London legend of a murderous barber in 19th-century Fleet Street, Sondheim's musical is a thrilling blend of melodrama, throat-slashing, devastatingly lovely music and one lonely man's revenge against the world. Sweeney Todd (Depp), formerly Benjamin Barker, is a jaded man returned to London after a long banishment. An evil judge (Alan Rickman) has stolen Todd's wife and daughter; the wife is gone, the daughter held captive. With the help of the cheerily amoral baker Mrs. Lovett (Helena Bonham Carter), Sweeney vows that he will find vengeance — with his beloved razor blades. "Because the lives of the wicked should be made brief," he sings. "For the rest of us, death will be a relief." (No, this isn't "The Sound of Music.")

No summary does justice to the way Sondheim's luscious music (gorgeously rendered here by an orchestra far bigger than any stage production could muster) twists around the characters; at times playful, at times overwhelming in its emotions. And Burton's film, masterfully designed by Dante Ferretti and shot by Dariusz Wolski, provides the perfect accompaniment for the score. The color's already in the music, so Burton's bleak London is drained of hue; rendered in blacks, grays, and ghostly whites and punctuated by the occasional river of crimson. Nothing in this world is pretty, except the flower-market reverie in which Sweeney remembers his last moments with his wife and child. Colleen Atwood's costumes are dusty and creased, as if they've spent time in a Victorian trunk; the actors' makeup is ashen-pale, with sooty smudges under their wary eyes.

And yes, Depp can sing — but that's almost beside the point. His Sweeney, younger and more fragile-looking than the role is usually depicted on stage, is a man visibly broken; he looks like he's standing in a colder light, and he sings through a sneer that doesn't quite hide his pain. Sweeney cares for no one anymore, not even Mrs. Lovett — who clearly adores him. Bonham Carter gives the widowed baker a devastating vulnerability; she's a practical woman who's allowed herself to fall in love with a man who doesn't even look at her. While her voice is a little too soft and sweet for the role (the comic song "The Worst Pies in London" seems beyond her range), her character work is so good that you forget any vocal weakness. The two create a great tragic duo (briefly comic, in the darkly merry fantasy sequence "By the Sea"); they're meant for each other, even as Sweeney can't see it.

The beauty of "Sweeney Todd," on stage or on screen, is that it's a melodramatic story played straight; these bloodthirsty characters are human beings whose pain is expressed through exquisite song, and who can break your heart even as their actions horrify. Sweeney, having slashed a throat as part of his day's work, gazes at a picture of his lost wife, gently touching it with a pale finger. It leaves behind, traced on the fading photo's glass, a rose-red trail of blood.