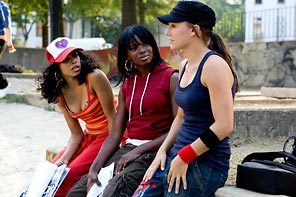 So, did you know that Will Kemp is known as "the James Dean of ballet"? I didn't know this, but the Internet Movie Database does, and it will surely be the most lasting bit of knowledge I take away from "Step Up 2 the Streets," a silly sort-of-sequel that never makes the case for not going straight to video.

Kemp, a fellow so ridiculously handsome you wonder why he's not playing a Disney prince somewhere, is a dancer best known for starring in Matthew Bourne's all-male "Swan Lake" (a lovely swan photo of him turns up in this movie, just to give us balletomanes something to do). Here, he's Blake, the full-of-himself head of a Baltimore arts school, and he's constantly making pronouncements and marching out of the room — maybe to go get on a motorcycle and do some James Dean-like things off-camera? — and after a while you might want to join him.

Otherwise, "Step Up 2 the Streets" goes through the motions of virtually every other dance-competition movie ever made (including "How She Move," in theaters mere weeks ago). Directed by Jon M. Chu, it's a warmed-over retread of 2006's "Step Up." Andie (Briana Evigan) is a troubled girl from the wrong part of town who's given an opportunity to straighten up at the Maryland School of the Arts. (Her audition scene is right out of "Flashdance"; you almost expect her to pick up a welding torch in her spare time.)

At the school, she meets Chase (Robert Hoffman), a dancer at the school who just happens to be Blake's younger brother. Soon — despite Blake's disapproval — they're forming their own hip-hop-flavored troupe and challenging in "The Streets," an urban dance contest featuring kids from Andie's past.

Everyone in the cast is a terrific dancer (particularly Kemp, whose few brief seconds of dancing here are cruelly tantalizing), but not necessarily a charismatic actor. Adam G. Sevani is a pleasant exception; he's endearingly dorky as Andie's friend Moose, and he dances as if caught in his own personal strobe light. Leaving the dialogue scenes flat, Chu puts all the movie's energy into the dance sequences: There's an infectious samba at a party, a riotous dance duel involving trampolines and a jittery rain-soaked finale that would have been more fun if Chu hadn't chosen to shoot it in the dark. "This ain't 'High School Musical!' " yells an observer at one of the dance competitions. For better or worse, it isn't.