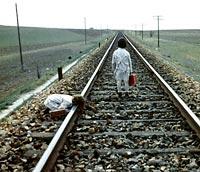 "Spirit of the Beehive" is the story of two sisters in 1940 Spain. (NORTHWEST FILM FORUM)
By Moira Macdonald
Seattle Times movie critic

An anxious mother, concerned about her young daughter's reaction to a trauma, is comforted by a doctor. "Bit by bit," he tells her, "she'll begin to forget."

"Spirit of the Beehive," Victor Erice's hypnotically beautiful 1973 film, focuses on a child young enough to forget, still immersed in a make-believe world that she'll soon leave behind. Ana (Ana Torrent) is perhaps 6 years old — a tiny girl with huge eyes and an expression that indicates she takes the world very seriously indeed. She lives in a small Castilian village in 1940, just after the Spanish Civil War. Her parents have a distant, strained marriage, and she and her slightly older sister, Isabel (Isabel Tellería), happily wander the family's large, near-empty farmhouse, as if they're alone in the world.

The arrival in their small town of the movie "Frankenstein" (shown in the crumbling town hall, with audience members bringing their own chairs) captures the little girls' imaginations.

Whispering in their bedroom at night, Isabel tells her sister that the monster is a spirit, and that he is near. Soon Ana finds him, or thinks she has found him: a man hiding in a deserted barn. She gives him an apple, just as the child on the movie screen gave the monster a flower. And likewise, his presence leads to a dark night's search, with villagers wielding torches and calling a surprising name.

Screening in a new print so pristine you forget that this film is 33 years old, "Spirit of the Beehive" sweeps you into its quiet world. We see how the more worldly Isabel tries out more adult behaviors, frightening her sister while poor Ana looks betrayed. But Ana will soon follow in her footsteps.

Late in the film, we see the child in her ruffled nightgown, walking to a window where the moon's glow streams in, like the reverent lighting of a church. She's looking out into the night, searching, perhaps, for something that isn't there anymore.

As this beautiful film reminds us, childhood moves at its own pace. We may have forgotten our own 6-year-old magic, but in Ana's face, we may find just a bit of it again.

"Spirit of the Beehive," with Ana Torrent, Isabel Tellera, Fernando Fernn Gmez, Teresa Gimpera. Directed by Victor Erice, from a screenplay by ngel Fernndez-Santos and Erice. 95 minutes. Not rated; for mature audiences. In Spanish with English subtitles. Northwest Film Forum, through Thursday.