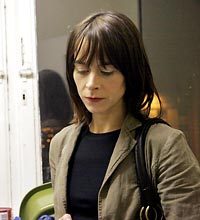 There's an unexpected moment in Andrea Arnold's psychological thriller "Red Road" that's perhaps the most heartbreaking illustration of grief I've seen in a movie in a long time, and it's all the more effective for being absolutely quiet. It's one of many surprises in this moody, hypnotic thriller, a prizewinner at the Cannes International Film Festival last year and an auspicious feature debut for the British director (who won an Oscar in 2003 for her short film "Wasp").

In the film, a young Glasgow widow named Jackie (Kate Dickie) works as a security guard for City Eye, spending her days staring at a checkerboard of closed-circuit TV screens around the city. Her job is to stop tragedy before it happens, but it comes too late for her own life. As we gradually learn, the sad-eyed Jackie is haunted and frozen by loss; she's observing life on those screens, rather than taking part in it. One day, on one of those screens, she spots a familiar face: a man (Tony Curran) who represents something dark in her past. Slowly, inexorably, the movie focuses in on the two of them as she enacts a disturbing plan of revenge, taking charge (to a shocking degree) of her fate.

Dickie, her face drawn and resolute, gives an honest, often moving performance; the quiet weight she can put behind a simple sentence ("I want them back," she breathes, in a tiny voice) is often devastating. (Due to the actors' heavy accents, the film is subtitled in English, but the clarity of the actors' character work makes the titles mostly unnecessary.) Though it's paced as a thriller, the film ultimately emerges as a haunting exploration of how grief can weigh on us, and the depths to which it can drive us.

113 minutes. Not rated; for mature audiences (contains nudity and scenes of sexuality and violence).