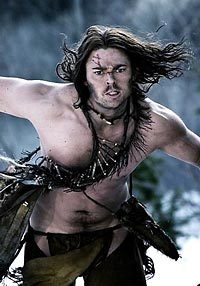 Run, Karl Urban! Run! They're about to show "Pathfinder"! ( / MCCLATCHY NEWSPAPERS)
By Jeff Shannon
Special to The Seattle Times

By any rational criteria, "Pathfinder" barely qualifies as a movie. It takes 100 minutes to tell less story than you'd find in most TV commercials, and tells it with such dour solemnity and lack of coherent purpose that it's hard to imagine its screenplay was ever written. But it was — by one of the writers of Oliver Stone's "Alexander," so consider yourself warned.

Unlike Stone's film, no amount of editorial tinkering could ever fix "Pathfinder." Loosely inspired by the Oscar-nominated 1987 Norwegian film of the same name, this crushing bore begins by telling us (as legend would have it) that Vikings discovered North America 600 years before Columbus. One of their longboats was destroyed, and the sole survivor was a boy adopted by a northeastern Native American tribe, renamed "Ghost" and raised as one of their own.

Ghost defends his tribe, and the ensuing Viking-against-Viking smackdown consists of seemingly endless low-budget battle scenes so badly edited that you can't tell (and don't care) who's beheading whom. Drained of all color and set against near-constant snowfall, "Pathfinder" runs its murky course with cheap-looking CGI, dreary locations (filmed in Vancouver, B.C.) and a climactic sequence on a treacherous mountain ledge that was done far better in "The Fellowship of the Ring."

Best known for his 2003 remake of "The Texas Chainsaw Massacre," Marcus Nispel directs this waste of time as if he were anesthetized, and that numbness extends to the performances, for which "wooden" is a generous assessment. Compared to the dynamic "Apocalypto," there is simply nothing in this film to hold anyone's interest.

Fan-boys and Fangoria readers are this movie's target audience, and they'll be the most disappointed. The official "Pathfinder" Web site is far more interesting than the movie itself, and you'll get better history lessons from the Vikings of Minnesota.

from a screenplay by Laeta Kalogridis. 100 minutes. Rated R for strong brutal violence throughout. Several theaters.