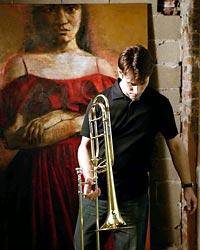 Daniel Anker's thoughtful and often lovely documentary "Music from the Inside Out" begins with a question that seems to stump the classical musicians to whom it is posed. What is music, they are asked. The musicians, all members of the Philadelphia Orchestra, pause and stammer and ponder. Ultimately, they can't really define it, for a very simple reason: It is what they are. "It comes from the deepest place within you," says a cellist wonderingly, as if he doesn't quite know how it got there. It is part of their skin (like the permanent mark on a violinist's neck, where the instrument is pressed); part of their souls.

An orchestra is made up of many individuals who blend together to create a harmonious whole, with a few emerging as solo voices, and Anker constructs his film exactly this way. There's a great sense of community among these musicians, who often assemble before Anker's camera, in groups of a dozen or two, for discussions of their art. They're not always identified by name; we just know that they are part of what one musician calls "the sculpture of sound."

"Music from the Inside Out," a documentary directed by Daniel Anker. 90 minutes. Not rated; suitable for general audiences. Varsity, through Thursday.

Anker's clearly interested in stripping away the formality in which classical music often seems to be encased: Much of his footage is from rehearsals rather than performance, with casual musicians in jeans and T-shirts, and he seems especially intrigued by those who dabble in other forms of music. A trombonist plays salsa music with a Latin band late at night after symphony concerts; a violinist jams happily with a bluegrass group. And a serene quintet plays chamber music in what appears to be somebody's living room; their heads bobbing gently to the music, their faces satisfied.

A few personalities stand out along the way, most notably violinist David Kim, who movingly tells how his ambitious mother shaped his early career ("it was as if she was telling me my own biography as it was happening") and how he found peace in his 30s by changing his dreams. And a pair of violin-playing brothers from the Bronx, Joe and Lou Lanza, return to their old working-class neighborhood to share memories of their father, who would weep as he listened to operas on the radio.

Ultimately, though, "Music from the Inside Out" is not so much about the people, but about what they create, and it's at its most effective when the talking stops. Midway through the film, in rehearsal, second violinist Kimberly Fisher plays the melancholy, exquisite "Meditation" from "Thaïs." The notes float in the air, drawn out like a dancer's stretching limbs, and Fisher plays with her eyes closed, lost in the beauty of the moment.

And the film ends on the perfect note: As the orchestra plays, the camera pulls away slowly, showing us more and more of the 105 people who create the music. One man stands out; he's not someone we've met before, and he's not playing at that particular moment, but the expression of quiet joy on his face speaks volumes. He is part of the art; the art is part of him.