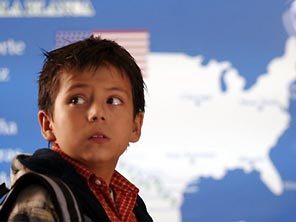 Adrian Alonso plays Carlitos, who is in search of his mother in the United States. (COURTESYFOX SEARCHLIGHT PICTURES)
By Jeff Shannon
Special to The Seattle Times

"Under the Same Moon" combines all the elements of an old-fashioned tear-jerker with the low-key, low-budget intelligence of a carefully crafted indie film. Bilingually accessible to a wide audience on both sides of the U.S./Mexico border, it's got the kind of crossover potential (no pun intended) that gives distributors a hopeful jolt of box-office optimism.

We're not talking "Little Miss Sunshine" here; director Patricia Riggen (who scored a modest indie hit with 2004's "Family Portrait") has a more delicate, natural style and isn't too eager to please. She's astutely in tune with a sensitive, well-structured screenplay (by Ligiah Villalobos) that deliberately appeals more to the heart than the head. On an emotional level, it works like a charm; anyone looking for a politically sophisticated tale of "illegals" in the U.S. will have to look elsewhere.

Tugging tenderly at universal heartstrings, this mother-and-son melodrama transcends political debate with its humanitarian focus on the journey of 9-year-old Carlitos (Adrian Alonso) as he illegally enters the U.S. to find his mother, Rosario (Kate del Castillo). Four years earlier, she reluctantly left Carlitos with her mother in Mexico, barely evading border guards to seek a financially brighter future as a domestic worker for wealthy snobs in Los Angeles.

As it tracks the parallel stories of mother and son, "Under the Same Moon" accumulates a wealth of gentle character detail, including the wizened humor of Carlitos' part-time guardian/employer, who brokers border crossings for illegal migrant workers; the pleasantly unhurried attraction between Rosario and a fully naturalized suitor (Gabriel Porras); and the emerging altruism of an unlikely father figure (Eugenio Derbez) who accompanies Carlitos from El Paso to L.A.

Featuring "Ugly Betty" star America Ferrera in a suspenseful border-crossing sequence, "Under the Same Moon" is manipulative at times, but not so much that you'd object to it. This stuff worked when D.W. Griffith teamed with Lillian Gish, and it still works today.