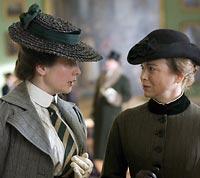 There's something irresistibly charming about Chris Noonan's Beatrix Potter biopic "Miss Potter"; the film curls up inside its audience's imagination and nestles there happily. Noonan, best known for "Babe," adds touches of animation to the film to help bring us inside the head of his writer/artist heroine. We see young Beatrix, growing up in upper-class Victorian London, watching her parents leave for a party. As she gazes out the window, the horses drawing her parents' coach are suddenly replaced by giant white rabbits. The real world, we learn, isn't quite as delightful as the one in Beatrix's imagination.

And so it goes throughout "Miss Potter," as we follow Beatrix (played, as an adult, by Renée Zellweger) through some of the events of her life: the publication of her first book, "The Tale of Peter Rabbit"; her engagement to her editor, Norman Warne (Ewan McGregor); her eventual move to a farm in England's Lake District, where she became a sheep farmer and land conservationist while continuing to craft her beloved tales. (She died in 1944, having published 23 children's books, many of which were best-sellers.) The film is just a taste of a life that's clearly more complex than Noonan and screenwriter Richard Maltby Jr.'s 92 minutes can bring, but "Miss Potter" achieves what the best of film biographies do: You leave tantalized, wanting to know more about its subject.

As Beatrix, Zellweger is at times problematic: While her British accent is spot-on, it's also remarkably like the voice we know well as Bridget Jones. Her Beatrix has a cheerfully gung-ho attitude that's also sometimes reminiscent of Bridget, as is her habit of scrunching up her face; at times, you half-expect Colin Firth to show up in a reindeer jumper. But she's quite affecting as Beatrix deals with both joy (accepting Norman's proposal, she quietly glows) and tragedy in the film's second half. And she subtly shows us Beatrix's emotional growth as she gradually shakes off her domineering parents, standing straighter and speaking more resolutely near the film's end. She is, as she notes with prim satisfaction, "no longer in the habit of being lectured to."

McGregor, as Norman, has the sort of stammering, shy good-fellow role usually associated with Hugh Grant, and he brings a calm, intelligent sweetness to the character. Emily Watson is so good as Norman's sister Millie, who fiercely announces upon first meeting Beatrix that they shall be the best of friends, that you wish she could have gotten a crack at the lead role. And the Lake District, which becomes a haven for Beatrix, plays its role to the hilt; its dramatic sheep-dotted landscape acts as a striking contrast to the small-scale charm of Potter's animal drawings.

Noonan mostly keeps the animation, inspired by the real drawings, to a minimum (though, occasionally, it invades to the point at which you wonder whether Miss Potter is quite right in the head), and its whimsy lends itself to the charming world he's created. All the appropriate period details are here: the ecru lace, the elegantly cluttered drawing rooms, the railway platform where a couple kiss swoonily while surrounded by a train's steam. It's a soft-focus picture of a woman who, surely, had a few more hard edges, but it's a thoroughly pleasant escape to another world.