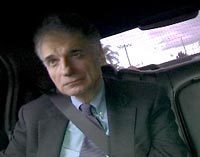 This George Bernard Shaw quotation gives a title and a focus to Henriette Mantel and Steve Skrovan's intriguing documentary about Ralph Nader, the groundbreaking consumer activist now perhaps better known as an unsuccessful yet influential presidential candidate. And, after watching the film, it seems an entirely appropriate description of Nader, a man for whom dogged persistence is a way of life. "Persisting. Persevering. That's what life's all about," he says in the final reel.

Though the tone of Mantel and Skrovan's film is admiring (Mantel is a longtime friend and former office manager for Nader), the filmmakers capture the strong current of anger against Nader, particularly Democrats who feel that his presidential run in 2000 put George W. Bush in the White House. In fact, the film begins with a chorus of angry voices, from a writer bitterly thanking Nader for the Iraq war to Jimmy Carter's familiar drawl, suggesting that Nader return to "examining the rear ends of automobiles."

That's where Nader's career began: as an attorney in the '60s who began probing the issue of automobile safety, resulting in the landmark book "Unsafe at Any Speed." The son of Lebanese immigrants (his father, a restaurant owner, would assign his children conversation topics for dinner), Nader devoted his adult life to consumer protection and to raising awareness of the dangers of corporate domination.

He was instrumental, we're reminded, in getting seatbelts and airbags into cars, in requiring airlines to compensate bumped passengers, in passing the Safe Water Drinking Act, in getting millions of defective motor vehicles recalled, in improving access to government through the Freedom of Information act. Along the way, he became one of the best-known people in America. "I think Ralph got more mail than the Beatles," says Mantel.

The man behind this astonishing career, however, remains something of a cipher. He is, we learn, intensely loyal but quick to anger toward those who leave his circle. "Personal loyalty cannot come at any price. It becomes an indulgence," he says, speaking of friendships lost. And his personal life — " Nader never married — seems a complete blank. A Nader biographer, sounding a bit flummoxed, admits that after much digging he couldn't find any evidence that his subject had any kind of life outside of his work.

"An Unreasonable Man," with its parade of talking heads, doesn't break any new ground in the documentary genre, but it's an often fascinating look at a complicated figure. You may walk away from it still wondering why Nader persisted in running for president in 2004 after being repeatedly begged not to. (A television clip shows Bill Maher and Michael Moore on their knees before Nader, beseeching him: "You're a great American! Don't do this!") But, whether or not you admire the decision, the film forces you to admire the determination with which Nader made it; a grit and focus that seems to have marked his entire life.

"An Unreasonable Man," a documentary by Henriette Mantel and Steve Skrovan.

Ralph Nader will take questions from the audience via video conference after today's 7 p.m. screening. Skrovan will be in attendance for shows tonight and Saturday night.