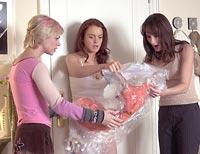 Redheaded Ashley Albright (Lindsay Lohan) is one lucky girl: She's got a fab apartment, a kicky job in PR, a cutely coordinating pair of best friends (one blonde, one brunette) and the kind of otherworldly good fortune that allows her to prance around Manhattan in a chic white coat and never look the slightest bit smudgy. All is spun-sugar-peachy in Ashley's world — until a kiss from a hard-luck case named Jake (Chris Pine, the handsome prince from "Princess Diaries 2") changes everything.

And then ... hmm, can you guess what happens? Sure you can. And while romantic comedy has never been a particularly unpredictable genre, "Just My Luck" has the sort of screenplay you can practically recite along with the actors. Ashley loses her good luck while Jake gains it, and it takes her far too long to figure out how to get it back again. In the meantime, a prepubescent-looking British boy band sings a few songs (don't be fooled by the jobs and apartments; this is a teen movie), and our heroine gets to sashay around in some designer outfits.

All of this would be fairly unbearable if it weren't for Lohan, who has the sort of sunny, scratchy-voiced charm that's perfect for this material. Her appeal on screen is reminiscent of, say, Drew Barrymore or Sarah Jessica Parker (who's referenced in the movie as a fashion icon). She's an offbeat beauty, with a palpable warmth and the gift for physical comedy she previously showed in "Freaky Friday." (When Ashley's luck turns, she becomes a klutz, at one point causing an entire shelf of bowling balls to collapse — which Lohan punctuates with hilariously apologetic smiles.)

If "Just My Luck" was intended to showcase a more grown-up Lohan (she'll soon be 20), it fails — but it gives hints of the fine screwball comedian she's already becoming.