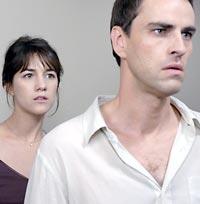 Two women face each other in a quiet living room; the younger one a whispery slip of a thing with wondering eyes but a determined manner, the older sharp-eyed and taut, so still she barely seems to breathe. The older tells the younger, in a voice like refrigerated air, that she made sexual advances to the younger woman's husband. The younger woman isn't affected by this news, or perhaps pretends not to be. All the while, the camera moves from face to face, staring at each woman from behind the shoulder of the other. The air is electric, the mood strange and ominous. What will happen next?

Dominik Moll's masterfully cast psychological thriller "Lemming" crackles with tension; its story keeps going off to unexpected places as we watch breathlessly, unable to look away. At its center are two opposite-seeming women. Benédicte (Charlotte Gainsbourg), the younger, is married to a handsome young engineer, Alain (Laurent Lucas). They live in a pleasant bungalow in the South of France, where Benédicte happily droops around the house, making dinner and beaming at her husband. Alice (the magnificent Charlotte Rampling) is the wife of Alain's boss, Richard (André Dussollier). She is unhappy, and displays it in a grim, theatrical manner. Invited to dinner at Benédicte and Alain's house, she wears dark glasses at the table, refusing to allow them to see her eyes.

"Lemming," with Laurent Lucas, Charlotte Gainsbourg, Charlotte Rampling, André Dussolier. Directed by Dominik Moll, from a screenplay by Moll and Gilles Marchand. 129 minutes. Not rated; for mature audiences. In French with English subtitles. Varsity, through Thursday.

That dinner, which has the nightmarish quality of "Who's Afraid of Virginia Woolf?," is the beginning of a strange connection between the two couples, particularly the women. The less said about the plotline, the better; know only that it does involve an actual lemming (who turns up, mysteriously, in a sink drain), that the "mini-flying-Webcam" that Alain is developing at work makes a crucial appearance late in the film, and that you'll never think of the song "Dream a Little Dream of Me," which plays over the end credits, in quite the same way again.

Moll, who demonstrated in "With a Friend Like Harry" an early gift for finding creepy tension in everyday life, gives the film a chilly elegance, with nearly every scene delicately dripping with omen (including a shivery Hitchcockian dream sequence that's just a bit over the top). A ride to a vacation home feels like a journey into unknown danger; a scenic shot of a mountain reveals a jagged profile that looks, startlingly, like a screaming face.

And his two female leads are superb. Gainsbourg, as always, has an ethereal quality to her; her tiny voice floats in the air. Her Benédicte is deceptively uncomplicated, often staring at a questioner as if she's not quite sure what she thinks yet, yet hinting at an inner strength. She's a perfect visual counterpoint to the ever-dangerous Rampling, who as Alice holds herself rigidly, with posture so erect it looks painful. Alice's eyes, exaggerated with dark makeup, seem to hang low on her face, but her gaze is direct and searing. After her ill-fated pass at Alain, she tosses back at him a warning, "Mind the smell of perfume." Indeed.