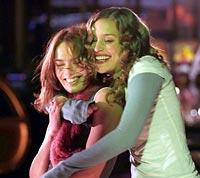 Ol Parker's uneven romantic comedy "Imagine Me & You" is prettily filmed and full of pretty people, so much so that it often feels less like a movie than an exceptionally winsome fashion-magazine layout. Lovely Rachel (Piper Perabo) is a nervous young London bride on her wedding day; the equally lovely (and, in fact, rather similar-looking) Luce (Lena Headey) is her florist, whom Rachel has never met. The two lock eyes at the church, and suddenly Rachel's well-planned life goes awry: Cupid's arrow has struck, inconveniently but irrevocably.

In other words, what we have here is sort of a lesbian version of "Four Weddings and a Funeral," and in spots Parker's movie finds some of that film's charm. All of the characters are attractive and likable, and Parker's screenplay occasionally provides them with some wit. "Do you believe in love at first sight?" sighs Rachel to a co-worker. Her practical friend, pondering the question, replies, "Well, it saves time."

But there's just not enough of this kind of spark — too often the movie seems to fade away, worn into submission by its own earnestness. Rachel's dilemma, which mostly seems to revolve around what to tell her nice husband, Heck (Matthew Goode), doesn't contain enough conflict to carry us through the film's scant 93 minutes. Parker's clearly on the side of love, and there's little suspense as to what will happen.

And the characters never really emerge as individuals; they're pretty puppets, moving through their prescribed paces. When some genuine emotion breaks through, in Heck's heartbreak, it feels misplaced, like it's in the wrong movie. Prettiness prevails, and Heck is given his own version of a happy ending, including some sweets and counseling from the film's requisite worldly wise child (Boo Jackson, playing Rachel's 8-year-old sister, a child so precocious she should open her own therapy practice).

"Imagine Me & You" is never less than pleasant to watch, even as it shamelessly steals from "Four Weddings" (a bridesmaid moans about not snagging a requisite usher) and goofily manipulates to throw Rachel and Luce together. (Why would a new bride accidentally drop her wedding ring into the punch, thus needing her florist to fish it out for her?) But it vanishes from memory quickly, like pictures in a glossy magazine, lovely yet oddly lifeless.