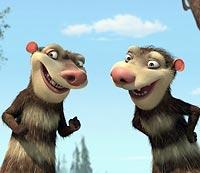 To those fans of the cute 2002 animated comedy "Ice Age," let me just say this: Scrat is back.

For the uninitiated, Scrat is a wordless, wild-eyed squirrel who spent all of "Ice Age" frantically trying to capture an acorn. Like Charlie Brown and the football, the goal proves elusive, but his efforts are wildly inventive. In the sequel "Ice Age: The Meltdown," he's got more adversaries to face: melting ice, a school of fish, a bird who's mistaken the acorn for an egg. Does he eventually capture his heart's desire? Well ... let's just say that his travails have more suspense than many a Hollywood blockbuster.

Scrat, however, is just a subplot in the enjoyable sequel "Ice Age: The Meltdown," which picks up where the last movie left off. The Ice Age, it turns out, is coming to an end (yes, global warming is mentioned), and the characters' frozen world is quickly turning into a giant water park. Manny the mammoth (voiced by Ray Romano), Sid the sloth (John Leguizamo) and Diego the tiger (Denis Leary) must journey to the other end of their vast valley to avoid the gush of water from a melting glacier.

Along the way, they pick up a few new friends, including a love interest for Manny (a female mammoth named Ellie, voiced by Queen Latifah) and a pair of scene-stealing, mischief-making possums who enjoy high-fiving. Watch for these two to star in their own spinoff movie soon, as soon as they get a decent agent.

Directed by Carlos Saldanha, who co-directed "Ice Age," the film feels visually richer than its predecessor (thanks to all that plain white ice melting) but has the same brand of uncomplicated all-ages charm. (It even has a musical number: a crew of vultures, watching the marching animals, perform a rendition of "Food, Glorious Food.")

And, of course, there's Scrat and his beloved acorn. In one scene, he holds it momentarily before losing it again, hugging it to his chest as if he's achieved his heart's desire. It's a love story writ small, and it's cuter than a homemade valentine.