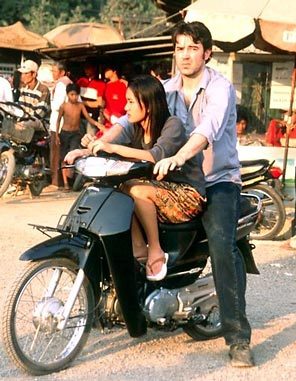 Ron Livingston and Thuy Nguyen star in a searing drama about child prostitution in Cambodia. (ELKANA JACOBSON)
By Jeff Shannon
Special to The Seattle Times

Any film that attempts to expose the evils of child prostitution automatically faces a challenge: How do you dramatize the subject matter without tipping toward another kind of exploitation (as happened with the recent, similarly themed "Trade") or taming the material to the point of inauthentic blandness? To its credit, "Holly" finds an admirable balance, applying a documentarylike immediacy to its melancholy tale of sex trafficking in Cambodia.

Perhaps inevitably, this well-meaning drama is influenced by the philanthropic circumstances of its creation. It was produced (along with two documentaries) to spearhead the K11 Project, named after Phnom Penh's notorious red-light district and designed to promote awareness of child prostitution. Noble intentions are typically anathema to good filmmaking, but "Holly" avoids that trap while falling into another: It views child sexploitation through the eyes of an American whose motivations remain largely unexamined.

Patrick (Ron Livingston) has been drifting through Cambodia for years, gambling and smuggling stolen artifacts for a shady entrepreneur (the late Chris Penn, in his next-to-last performance). When his motorcycle breaks down in the K11 district, he encounters Holly (Thuy Nguyen), a 12-year-old Vietnamese girl who'd been sold into prostitution by her impoverished family. Prized for her virginity, she's doomed to a life of "yum yum" and "boom boom" with K11's sordid clientele, until Patrick devotes himself to ensuring her safety.

To some extent, Patrick's confused intentions give the film an off-kilter edginess that works in its favor. His sincerity is never in doubt, and as he earns Holly's trust, Livingston (best known for his roles in "Office Space" and "Band of Brothers") does a fine job of suggesting his character's desperate need for some kind of redemption, while discreetly hinting that his attraction to Holly is not entirely platonic. Patrick isn't bucking for sainthood so much as he is seeking a shred of decency in a soul-crushing atmosphere of deep-rooted corruption.

First-time director Guy Moshe handles this ambiguity with delicate sensitivity, and the scenes between Livingston and Nguyen (who was 14 at the time of filming) have a rare quality of sadness and mutual connection. The use of authentic Cambodian locations adds immeasurably to the film's emotional landscape; the filmmakers deserve credit for capturing the physicality of K11 as a suffocating maze of illicit activity.

Yet despite its best intentions, "Holly" never achieves the dramatic clarity it needs to put its human suffering into galvanizing perspective. When we hear sobering statistics about child prostitution from a French human-rights advocate (played by Virginie Ledoyen in a thankless, underwritten role), we're ironically taken further from the human heart of the story, which hints at redemption while appealing to our collective sense of guilt.

The Seattle-based nonprofit "Stop Exploitation Now" is sponsoring a benefit screening of "Holly" Sunday at 4:20 p.m. at the Meridian, and a Q&A with co-writer/producer Guy Jacobson. Tickets are $30 ($15 students); see www.stopexploitationnow.org for more information.