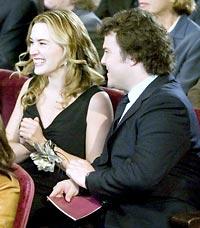 At holiday time, we're grateful for gifts large and small, and "The Holiday," fluffy and predictable and fuzzy-sweater-filled as it is, merits our gratitude. It's a romantic comedy that features — oh, the wonder of it! — a couple who we really want to see together, who actually make sparks fly and who are just so adorable that you fall a little bit in love with them yourself. And then there's another couple, but we'll get to that.

"The Holiday" is two love stories in one, written and directed by Nancy Meyers ("Something's Gotta Give"), Hollywood's reigning queen of expensive-looking romantic comedies in which everyone appears to be both wealthy and fresh from the hairdresser's. (This used to be Nora "Sleepless in Seattle" Ephron's bailiwick, until "Bewitched" made her star fade a bit.) Amanda (Cameron Diaz) is a Los Angeles woman who runs her own movie-trailer-editing company (causing her, cutely, to view her life as one big movie trailer). After an unpleasant breakup, Amanda looks online for a vacation location and finds herself swapping homes with London journalist Iris (Kate Winslet) — who is herself tearfully recovering from a Very Bad Man (Rufus Sewell).

So Amanda packs up her sweaters and satin sleep masks and all the necklaces she wears with her pajamas, and off she jets to Iris' charming cottage in Surrey. Meanwhile, Iris dries her tears and packs her sunscreen and tweeds and arrives, starry-eyed, at Amanda's high-tech mansion. And they each, to no one's surprise, meet a man. Amanda hooks up with Iris' brother Graham (Jude Law), who just may be too good to be true. And Iris locks eyes with Miles (Jack Black), a film composer who's unlucky in love but, by all accounts, an incredibly decent guy. "I know," he says, when his incredible decency is pointed out. "It's always been my problem."

So, guess which couple is the one you want to watch? You guessed it. Winslet, who's never done a Hollywood romantic comedy before, turns out to be a natural, blushing prettily and smiling so broadly the camera seems ready to embrace her. She knows how to make vulnerability funny, and her Iris is touchingly open to the world, happily dazzled by the glamour of L.A. And Black, who's calmer here than he's ever been on screen, seems to genuinely fall in love with her before our eyes.

Diaz and Law, though they look smashing together, don't fare quite so well. Amanda is more of a type (Type A) than a character, and Meyers burdens her with a number of excessively talky scenes, in which Diaz and her sweet, slightly ducky smile can't quite make a real person emerge from Amanda's bundle of neuroses. Law, usually a resourceful actor, seems to be coasting through "The Holiday"; he's charming but bland. Compared to Winslet/Black, Diaz/Law have little chemistry, and their plotline feels more contrived.

There are plenty of nits you could pick with "The Holiday," such as why the wealthy Amanda would house-swap when she could hole up in a five-star hotel, and why the shamelessly schmaltzy character of a retired screenwriter (Eli Wallach), befriended by Iris, is allowed to take over the movie for long stretches. Meyers pounds home the idea that romantic movies were better in the Golden Age of Hollywood, but by putting all those movies up for comparison with hers, she isn't doing herself any favors.

Ultimately, "The Holiday" works well enough, with two out of four characters finding some genuine holiday magic together. It's half a loaf, sure, but it's far better than none.