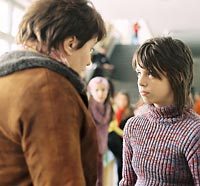 Esma (Mirjana Karanovic) discusses a school field trip with her daughter Sara (Luna Mijovic) in "Grbavica," playing at the Varsity. (STRAND RELEASING)
By Jeff Shannon
Special to The Seattle Times

In the Grbavica district of Sarajevo, in Bosnia, the scars of recent wars are both hidden and obvious. In former prison-camp neighborhoods where rape and torture were common, pockmarked buildings bear the scars of artillery, while the psychological wounds of war continue to heal.

Filmed on location in this slowly reviving district, Jasmila Zbanic's fictional drama "Grbavica: The Land of My Dreams" captures the legacy of war in the faces and body language of locals like Esma (Mirjana Karanovic), a single mother who's been keeping a secret of war from her 12-year-old daughter Sara (Luna Mijovic).

That secret is another harsh reminder of recent horrors, but it can't be hidden forever. Weary but still attractive as she holds down two thankless jobs, Esma has a loving bond with Sara, who's proud that her late father was a martyred wartime hero. But Sara's adolescent outbursts are manifestations of an illusion that threatens to drive mother and daughter apart.

These are the emotions that inform this remarkably assured debut by Sarajevo-born writer-director Zbanic, whose grasp of subtle human complexities is wise beyond her 32 years. "Grbavica" (pronounced ger-bah-VEET-sa) roughly translates as "woman with a hump," and as a firsthand witness to Bosnia's turbulent recent history, Zbanic has crafted a delicately observant drama about women who've shouldered the burdens of war.

"Grbavica" is an outstanding showcase for actors, bolstered by Zbanic's uncanny knack for enhancing authentic dialogue with perfect moments of non-verbal communication. Best known for her roles in films by Emir Kusterica, Karanovic modulates her performance so carefully that a brief smile can have a revelatory impact; we see Esma's strength even as she's prone to justifiable crying jags, and her cautious attraction to a handsome but potentially troublesome suitor (Leon Lucev) suggests the depth of her wartime trauma.

Mijovic is equally fine as a troubled pre-teen with a need to know who her father truly was. And while "Grbavica" concerns a legacy of hatred, it's also optimistic about Bosnia's physical and emotional reconstruction. If the film's final image doesn't move you, you'd better check your pulse.