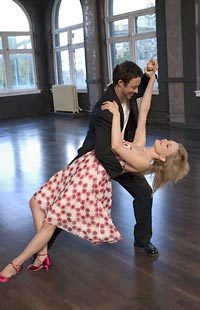 Those whose idea of heaven is "Top Hat" will understand how much I wanted to like a new movie in which a character expresses a desire to date "someone who doesn't think Ginger Rogers is one of the Spice Girls." In "Gray Matters," a limp romantic comedy from Sue Kramer, a couple dances to "Cheek to Cheek," and an impromptu dance number breaks out to "I Won't Dance" (they're dancing along with the 1946 movie "Till the Clouds Roll By," but we all know that Fred and Ginger did the song first). You could get dizzy from all the old movie references; unfortunately, not in a good way.

Essentially, "Gray Matters" is a romantic triangle mixed with a coming-out story, and both plots are impossible to take seriously. Set in contemporary New York City (which looks unusually pretty here, the way it did on "Sex and the City"), it's the story of Gray (Heather Graham), a ditsy 30-something blonde who appears to have watched Meg Ryan in "When Harry Met Sally" a few too many times. Like Sally, Gray seems to think it's adorable to place incredibly complicated, everything-on-the-side restaurant orders. (Is there an entire generation of waiters who curse Ryan's name?)

Gray spends her days batting her eyes and dithering about at the ad agency where she works, until one day it suddenly dawns on her that she just might be gay. Unfortunately, the woman she's in love with is Charlie (Bridget Moynahan), the beautiful if personality-free fiancée of her brother Sam (Tom Cavanagh). Gray and Sam are unusually close — they share a spectacular apartment and, apparently, take dance lessons together — so this is a tricky little problem. And, since Sam proposed to Charlie the day he met her (in just one of this film's numerous contrivances), it's a problem that needs to be dealt with — immediately.

There's something wistfully charming about a film that's trying so desperately to conjure the magic of '30s and '40s screwball. Everyone in "Gray Matters" talks in the rat-a-tat pace of a bygone filmic era, and many of the characters seem ripped from a vintage template: Molly Shannon as the wisecracking best friend, Sissy Spacek as a nutcase psychiatrist, April Telek as a squeaky-voiced secretary. But the writing isn't sharp enough for the film to work as comedy, nor are the characters real enough for the audience to connect emotionally. Echoing Fred and Ginger, it turns out, isn't so easy after all — they just made it look that way.