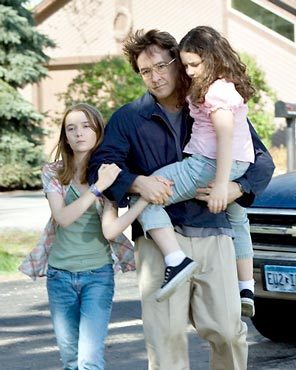 A late entry in last year's parade of war movies that nobody saw, James C. Strouse's "Grace Is Gone" is a beautifully acted and terribly sad film that never makes a case for its own existence.

Early on, we learn that an American servicewoman named Grace Phillips (whom we never meet) has died in the Iraq war, leaving her husband, Stanley (John Cusack), a widower and her two young daughters (Shélan O'Keefe, Gracie Bednarczyk) motherless. The film devotes most of its running time to an impromptu road trip in which Stanley struggles with how to break the news to his girls. We know that he will eventually tell them; we know that they will be devastated; we know this kind of tragedy is happening every day.

And we may not wish to watch "Grace Is Gone," a movie that draws its suspense from the anticipation of seeing two little girls experience devastating sadness. There's nowhere else the story can go, as is evident from the movie's title; there's no magic feel-good ending possible here. And the film has little to say, except its very specific sad story: As Stanley and the girls draw closer to their destination (a Florida theme park called the Enchanted Gardens), a few standard questions are raised about the war, and then let fall.

Stanley is a meticulous regular guy (the rooms of the Phillips' middle-class home have an almost painful tidiness) who has trouble expressing his love for his daughters. Cusack does fine, subdued work here, looking weary and tight as Stanley tries to maintain control in a world where nothing makes sense anymore. (He has one lovely, gentle moment: a tiny smile in spite of himself, as his younger daughter shows off a new dress — for a split second, he's forgotten his sadness.)

O'Keefe, as 12-year-old Heidi, is a quiet and watchful actor; her thin, pale face tells us things her voice doesn't. Heidi senses that all is not well on this seemingly carefree road trip while 8-year-old Dawn (Bednarczyk, a curly-smiled charmer) bounces around happily. "Can I have a monkey? Can I get my ears pierced?" she asks her distracted father, anxious to seize the moment.

Despite the strength of the cast (in particular O'Keefe, who's making her film debut here and shows tremendous promise), it's hard to muster much enthusiasm for "Grace Is Gone." It's a short film that feels long; you dread the terrible inevitability of its ending.