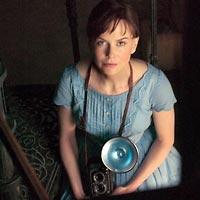 If you don't know much about the acclaimed photographer Diane Arbus, known for her haunting black-and-white portraits ("Identical Twins," "Jewish Giant At Home with His Parents in The Bronx, NY"), Steven Shainberg's new movie is not going to help you. "Fur: An Imaginary Portrait of Diane Arbus" has little to do with the real life of Arbus, who committed suicide in 1971 at the age of 48. Scripted by Erin Cressida Wilson, it's essentially an imaginative meditation on the idea of Arbus, an "Alice-in-Wonderland"-crossed-with-"Beauty-and-the-Beast" fantasy about the birth of creativity in an otherwise conventional young woman.

And on that level, it's only half successful. Nicole Kidman, in Alice-blue dresses and little-girl jumpers, gives a pale, whispery performance; her Diane seems afraid of the world. The film explores her growing intimacy with Lionel (Robert Downey Jr.), a strange, fur-covered man, frequently masked, who occupies a bizarrely decorated attic apartment in her building. (He's sort of a nonsinging Upper West Side version of the Phantom of the Opera.) Tiptoeing into his lair, equipped with white rabbits and pots of tea that say "Drink a cup," she is slowly seduced. By the time she finally embraces the beast, she's embracing herself and her newly awoken creativity.

Sounds excessively metaphorical, no? Actually "Fur" plays better than it sounds. Shainberg ("Secretary") has an artist's eye, and the colors and shadings of the camerawork (shot by Bill Pope) are murkily beautiful. Downey, always an intriguing performer, gives Lionel a boyish wistfulness that beckons behind the masks and hair. And the movie finds something mysterious in the act of photography itself: that scary, expectant instant while waiting for a flash; the persistent, metallic click of a '50s camera; the tiny moment of life frozen, for good or ill.

But Arbus (whose actual work is unseen, presumably because of rights issues) remains an enigma, and Kidman's wispy portrayal doesn't give the film the center it needs. By its end, "Fur" just sort of floats away, a celebration of a woman who isn't there.