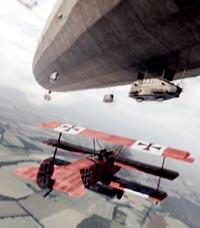 The battle heads toward Paris, in this story of the Lafayette Escadrille. (METRO-GOLDWYN-MAYER)
By Jeff Shannon
Special to The Seattle Times

As the digital biplanes in Peter Jackson's "King Kong" made clear, the time was ripe for a grand-scale revival of the World War I aviation movie. Now we have "Flyboys," loaded with clichés and digital dogfights more dazzling than anything in "The Blue Max" (1966) and "Von Richthofen and Brown" (1971).

But are these computer-generated Nieuport biplanes and Fokker triplanes really as impressive as the real thing? Not entirely, but that doesn't stop "Flyboys" from being a perfectly enjoyable slice of B-movie entertainment with A-movie production values. Aviation buffs will relish it, flaws and all.

Those spiffy effects have an artificial sheen. "King Kong" set the bar so high that the $65 million "Flyboys" can't match it in terms of digital photorealism, although some of the airborne wizardry is still wondrous to behold. More troublesome is a screenplay that dredges up every familiar element of combat movies without a shred of innovation, apart from whatever goodwill is engendered by fictionally embellishing a fact-based story set in France in 1916.

In this case, it's the tale of the Lafayette Escadrille, the French combat unit that pioneered aerial warfare during World War I, recruiting American pilots prior to our entry into the war. As a Texan maverick (well played by James Franco) signs up and eventually romances a charming French girl (Jennifer Decker), we take what pleasures we can from male-bonding camaraderie, including the first-ever black fighter pilot (Abdul Salis), a veteran bent on revenge (Martin Henderson, with charisma to spare), a stern but lovable commander (Jean Reno) and the chivalrous Black Falcon (Gunnar Winbergh), this film's answer to Germany's deadly Red Baron.

Director Tony Bill brings seasoned experience and affectionate reverence to this noble material, but the painstaking authenticity and appealing cast of "Flyboys" can't overcome the cloyingly formulaic nature of its story.