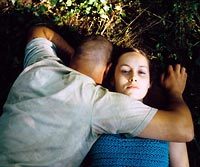 The men and women in "Flanders" connect physically but not on a deeper level. (NORTHWEST FILM FORUM)
By Jeff Shannon
Special to The Seattle Times

In much the same way that the acclaimed Turkish drama "Climates" used weather patterns to reflect the inner workings of its characters, "Flanders" draws a parallel between its rural French landscapes and desert battlefields and the internal lives of young lovers yearning for emotional rescue.

In the hands of philosophy-professor-turned-writer-director Bruno Dumont, however, matters of love and war are anything but romantic, and with its blunt-force vision of humanity, "Flanders" (winner of the Grand Prix, or second prize, at Cannes last year) is anything but comforting. With its depiction of bestial behavior and shocking wartime violence, it's the kind of film that polarizes viewers through the raw power of its imagery.

Whether its impact serves any noble purpose is debatable, but there's no denying that "Flanders" (named after the northern region of France where much of the film is set) is potently effective. Dumont, whose previous films include 1999's "L'Humanité" and 2003's much-reviled "Twentynine Palms," views his characters as animals at the mercy of primal instinct, and his careful direction of nonprofessional actors has prompted comparison to the similarly sobering films of Robert Bresson.

In other words, don't look here for spiritual uplift. As the hulking plow-driver Andre (Samuel Boidin, a truly unsettling presence on-screen) prepares to go to war, he engages in raw, unfeeling sex with his girlfriend, Barbe (Adélaïde Leroux), whose bad-girl reputation hides a sensitive and vulnerable soul. When he snubs her in public, she retaliates by having sex with Andre's friend Blondel (Henri Crétel), who will soon join Andre in a nameless Muslim war. In the heat of battle, their atrocities are just another outcome of the absence of love.

That's one interpretation, at least, and one which Dumont's ending appears to encourage. If love can't save us, are we worth saving at all?