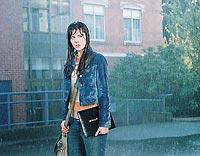 There must be an infinite number of ways that teenagers can be killed off in grisly, spectacular fashion, so fans of the "Final Destination" movies can rest assured that this popular horror franchise could continue indefinitely. That wouldn't be such a bad thing if future sequels are as perversely entertaining as "Final Destination 3."

Judging from the raucous enthusiasm of a preview audience, ill-fated teens are still worth their weight in box-office gold.

After letting others do the honors on "Final Destination 2," franchise creators and former "X-Files" writers James Wong and Glen Morgan have returned with another morbid menu of mayhem, this time involving seven high-school graduates who luckily escape a roller-coaster disaster, only to discover that their own deaths have been only temporarily avoided.

Generically cute Wendy (Mary Elizabeth Winstead, who's got the panic-and-dread thing down pat) spots clues of impending doom in digital photos of her soon-to-be-expiring classmates. An ill wind follows her everywhere, suggesting a supernatural force that makes her a catalyst for gory events, as each of her friends is dispatched in the order they were meant to die.

Connoisseurs of shock-movie contrivance will be delighted to learn that Wong and Morgan have made bloody-good use of that staple of movie violence, the hydraulic nail gun. The fan blades of a car engine, a pair of short-circuited tanning beds and malfunctioning gym equipment also factor into the escalating body count.

Rube Goldberg would be impressed by the elaborate cause-and-effect sequences that turn this film into a giddy showcase for the kind of messy mortality that makes people vomit or laugh out loud, depending on their appetite for cathartic carnage.

Wong directs with a knack for humorous suspense, cueing up the Ohio Players' 1975 hit "Love Roller Coaster" to tweak our fascination with gruesome urban legends.

The "Final Destination" movies may be pointless and crass, but they play on that fascination with malicious efficiency, and "3" is no exception.