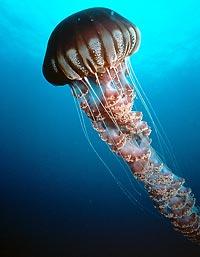 A Chrysaora jellyfish propels itself through the water off the coast of California in "Deep Sea 3D." (WARD HALL / WARNER BROS.)
By Moira Macdonald
Seattle Times movie critic

The terrific new IMAX film "Deep Sea 3D" begins with a wallop: a flinch-inducing wave crashing out over the audience, suddenly changing to an underwater shot of a school of translucent jellyfish, floating through the inky water like vague, mushroom-shaped ghosts. Children at a preview screening reached up as if to grab the jellyfish that seemed to be wafting among us; grown-ups might need to restrain themselves from doing likewise.

And so it goes, for a magical 40 minutes: underwater footage often startlingly beautiful, made more so by the immediacy of 3D. We meet such creatures as the frogfish, who has a "fishing pole" attached to his forehead; the fried-egg jellyfish whose head glows yellow; the basket star, a tomb-white starfish with tentacles resembling a lacy tangle of vines; and the wolf eel, an august-looking creature whom you can easily picture robed for an aquatic version of the Supreme Court.

Narrated pleasantly by Johnny Depp and Kate Winslet (you picture them tossing off the gig while still costumed for "Finding Neverland"), the film has a loose, free-floating quality to it. It's more a series of moments, connected by a general theme of interdependency, than a narrative with a beginning, middle and end.

But such is often the case with IMAX nature movies, and this one is a fine example of the genre. The filmmakers, who previously made the 1999 IMAX film "Into the Deep," quickly take us into a different world, where shrimp battle with octopi, tiny silverfish swarm happily around sharks, and forests of tube anemones sway on the ocean floor, like palm trees blowing in the wind.

Even the credits, with dainty fish swimming through and around the words, are a pleasure, as is the newly improved 3D-viewing experience (which now involves lightweight, comfortable glasses, rather than the heavy and headache-inducing goggles used not so long ago). "Deep Sea 3D" should be settling in for a long run at Pacific Science Center, and a well-deserved one.