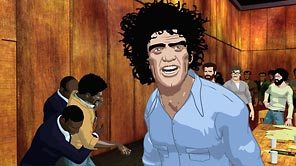 The animated film "Chicago 10" interprets transcripts of the raucous trial of protesters Abbie Hoffman and Bobby Seale (background). (COURTESY OF ROADSIDE ATTRACTIONS)
By Jeff Shannon
Special to The Seattle Times

It will be interesting to see how Brett Morgen's "Chicago 10" compares with Steven Spielberg's upcoming production of "The Trial of the Chicago 7." If "Munich" is any indication, we can expect Spielberg's film (due in 2009) to offer an exacting re-creation of tumultuous events surrounding the 1968 Democratic National Convention in Chicago, where the collision of Vietnam War protesters and club-wielding police resulted in riots, arrests and (a year later) some of the most uproarious courtroom theatrics in American history.

Spielberg's take on history will surely be invigorating, with the rumored (but still unconfirmed) casting of Sacha Baron Cohen ("Borat") as Abbie Hoffman. The irreverent "Yippie" leader, along with cohort Jerry Rubin and other high-profile protesters, turned the "Chicago 7" trial into a raucous demonstration of "total theater" aimed at stripping Judge Julius Hoffman (no relation) of his courtroom authority.

With "Chicago 10," documentary filmmaker Morgen ("The Kid Stays in the Picture") takes an altogether different approach that speaks directly to his own generation. Morgen was born in 1968, so it's no surprise that he's less interested in historical context than reviving the spirit of '68 with Abbie Hoffman as his inspirational hero.

By emphasizing immediate parallels between the events of '68 and the current war in Iraq, "Chicago 10" (Morgen adds Black Panther leader Bobby Seale and defense attorneys William Kunstler and Leonard Weinglass to the original "Chicago 7") is clearly intended as a rallying cry for a generation that seems woefully reluctant to protest the war. Morgen seems to be asking: They rose up then, so why can't we muster the same level of outrage?

"Chicago 10's" weakness is that it offers no answer to that urgently relevant question, and by using '60s music covered by contemporary artists (Beastie Boys, Eminem, Rage Against the Machine), Morgen sacrifices a more accurate historical context for a youth-targeted revival of Yippie passion. That's not a criticism (since Morgen makes his intentions perfectly clear), but those looking for meaningful perspective won't find it here.

Instead, Morgen captures that turbulent time through still-potent archival footage while intercutting the "Chicago 7" trial as an animated farce, freely interpreting courtroom transcripts through motion-capture animation performance (with a stellar cast of voice talent) that canonizes Abbie Hoffman (Hank Azaria) as court jester and Yippie provocateur, while poking fun at Judge Hoffman (the late Roy Scheider) as an authoritarian buffoon.

In light of the trial's obvious absurdity, Morgen's approach to history (however flawed or imbalanced) seems entirely valid, even as it stretches the definition of "documentary." If nothing else, it's a welcomed alternative to the more straightforward and serious film that Spielberg is likely to deliver.