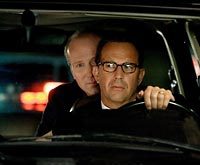 There's a weirdly inspired idea at the center of Bruce A. Evans' odd thriller "Mr. Brooks": William Hurt as Kevin Costner's alter ego. Think about it: two of cinema's dukes of deadpan, sharing a body and flatly intoning questions to each other. It's oddly effective; though they don't look much alike, you can absolutely picture them separated at birth, or sharing a speech teacher who specialized in monotone.

It's a giggly concept, but there's little that's funny about "Mr. Brooks," which has a very dark plotline indeed. Costner plays the title character, an absurdly wealthy fellow with a successful business, a loving family and two absorbing hobbies: pottery and murder. Mr. B has a staggeringly lavish ceramics studio behind his house to which he often retreats late at night, telling his wife (Marg Helgenberger) that he's going out there to "try out different glazes," which certainly sounds like a euphemism for something nasty.

And he has an invisible friend named Marshall (Hurt) who whispers terrible things in his ear, egging him on in his second career as a serial killer of some renown; he's known to the press as the Thumbprint Killer. Marshall keeps turning up in the dark, or in Brooks' rearview mirror, drawling invitations to murder and praising Brooks as he methodically cleans his car and burns his clothing after slaughtering a couple in their bed. The story becomes further complicated by a detective (Demi Moore) determined to track down Thumbprint's identity; a victim's neighbor (Dane Cook) with some strange voyeuristic tendencies of his own; and Brooks' daughter (Danielle Panabaker), a surly mouthed teen whose actions demonstrate, chillingly, that this apple didn't fall very far from the tree.

Set in Portland (though mostly filmed in Louisiana), "Mr. Brooks" has a sleek elegance to it; its interiors hum quietly with money, at odds with its sometimes frenetic story. It's ultimately a strange showcase for Costner, whose relaxed demeanor better suits breezy comedy. (Who would want to believe that "Bull Durham's" Crash Davis was a murderer?) Though it's certainly more genuinely creepy than many recent thrillers, and the supporting cast (particularly Cook) is effective, "Mr. Brooks" is never quite as delicious as its central pairing. In their dark suits and tasteful haircuts, Costner and Hurt murmur to each other like an extremely subdued vaudeville act; you sense that, if called upon, they could sing in perfect unison. Maybe next time.