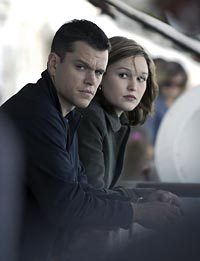 Watching Paul Greengrass' jolting, breathless chase thriller "The Bourne Ultimatum" is a bit like running on a treadmill: You get a good workout, even as the view remains predictable. This is the sort of movie in which somebody says, "Um, he drove off the roof," and it isn't a metaphor. Matt Damon, as trained assassin Jason Bourne, slips in and out of crowds, rides his motorcycle up a concrete wall, beats up a faceless army of guys who want to do him in, jumps across rooftops, races a car through the streets of Manhattan, does a few nifty tricks with cellphones and never once cracks a smile.

Not that he's got much reason to grin: Bourne, as we learned in "The Bourne Identity" and "The Bourne Supremacy" (both based, as is "Ultimatum," on the novels of the late Robert Ludlum), is haunted by his shadowy past; by the murder of his girlfriend, Marie; and by the unpleasant fact that many people all over the world wish to kill him. And while the third movie reveals some previously unknown details of Bourne's past, he's still more of a video-game figure than a character. Damon, a fine actor, is reduced to looking elusive and shifty and to making cool-voiced cellphone calls from unexpected locations.

Likewise, the rest of the cast shift rapidly like chesspieces on a sped-up board, with little time for performances. Joan Allen and David Strathairn, as a pair of icy CIA types, have a few scenes together that could be electric, but the ever-moving cameras seem more interested in finding edgy angles than in letting the actors — and the audience — have a moment of calm. Greengrass' devastating, masterful "United 93," though fast-paced and chaotic, took the time to find some quiet moments; "Bourne Ultimatum," though an utterly different kind of movie, would have benefited from the same touches.

Julia Stiles, whose character Nicky (introduced in the first movie) finds herself on the run with Bourne, has only one note for her performance: wary. In one scene, Nicky busily dyes and cuts her hair so she won't be recognized; it's a deliberate echo of an on-the-run scene in "The Bourne Identity," when Jason gives Marie a very stylish new haircut. (Apparently it's one of his spy superpowers.) Here, the two just eye each other and the scene goes nowhere; as, alas, does Stiles' new 'do.

But even as the movie's caffeinated pace grows familiar (the movie is a dead ringer for Greengrass' "The Bourne Supremacy" in look and speed), you appreciate the skill with which it's fitted together. Different locations — Tangier, Madrid, London, New York — zip by breathlessly, shaping the movie's story in a series of overlapping hubs. Greengrass somehow manages to keep the pace aerobically snappy for almost two hours, never letting it lag. You don't wonder about the tricky holes in the story (how on earth did Damon get into Strathairn's office in a blink, when we've already seen the lengthy security process Strathairn's character had to go through to get there?), because you don't have time to wonder.

And many of the action sequences (in a film made up almost entirely of action sequences, with a few breaks in which characters bark orders at each other) are masterfully done, particularly an early one set in London's bustling Waterloo train station. In and out of the crowd Bourne goes, slippery as a noodle, never hesitating. The ever-cutting cameras seem to take on his character and his confidence, always a step ahead of us, keeping the audience leaning in breathlessly. "The Bourne Ultimatum" may not break any new ground in cinema, but as summer action movies go, it's like a cool drink: familiar yet icily refreshing.

111 minutes. Rated PG-13 for violence and intense sequences of action.