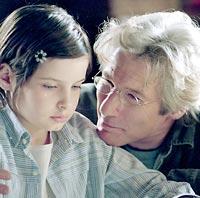 Flora Cross, 12, is exceptional as the youngest child in a dysfunctional family in "Bee Season."
By Jeff Shannon
Special to The Seattle Times

Perhaps I'm better off having not read Myla Goldberg's best-selling novel "Bee Season," because I didn't approach the movie version with distracting thoughts about which parts of the novel are missing or weakly adapted. All I know is, "Bee Season" got better the more I thought about it.

For one thing, it's more thoughtfully conceived than most of what passes for filmmaking these days. As they proved in their superb mystery-thriller "The Deep End," co-directors Scott McGehee and David Siegel know how to precisely parse information through visual detail and careful attention to human behavior. They may not be "Hitchcockian" in the purest sense, but they share Hitchcock's skill in strategically controlling what they want us to see and hear.

That alone makes "Bee Season" a stimulating experience, as visual details inform the story as it unfolds. We quickly learn volumes about the spiritual and emotional dysfunction of the Naumanns, an academically inclined family in Berkeley, ensconced in one of those comfy homes full of books, brains and broken relationships.

Eleven-year-old daughter Eliza (Flora Cross) goes virtually unnoticed until she wins a regional spelling bee, prompting Saul to invest his selfish pride in her success. What he can't know, in his academic grasp of Kabbalah theory, is that Eliza is a genuine Kabbalah mystic, engaged by words and their correct spellings on the deepest spiritual level. For her, spelling is a subconsciously spiritual way of solving a complex familial puzzle. (For the filmmakers, it's a way to indulge some precious computer-generated wizardry.)

How this is dramatized by screenwriter Naomi Foner Gyllenhaal (mother of actors Jake and Maggie) — and how "Bee Season" hinges on the exceptional performance of 12-year-old Cross — is both vexing (because much of the film is so self-consciously clever) and ultimately rewarding. Like Gere's character, the film is vaguely distant for longer than it needs to be, but the end justifies the means, when mysteries are solved and motivations fully understood.

Only then is the strength of "Bee Season" fully revealed, when Eliza makes a decision that's wise beyond her years. It's one of the finer movie moments of 2005.