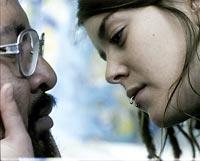 A mischievous critic might lure readers into "Battle in Heaven" by describing scenes of explicit sex and full frontal nudity. A less charitable review could warn you to avoid a mystifying art film guaranteed to cure insomnia. Both reviews would be accurate to a point, and also unfair.

Is it any wonder that Mexican director Carlos Reygadas' second film (after his similarly controversial 2002 debut, "Japón") prompted an outrage at Cannes last year, after the festival had initially rejected it? It's hard to imagine anyone loving this film, but hating it would be a sign of incomprehension.

Reygadas freely admits to having little interest in conventional narrative, which explains why he'd pan away from an explicit love scene between a fat Mexican chauffeur named Marcos (Marcos Hernandez) and his equally flabby wife (Bertha Ruiz) with a 360-degree survey of their Mexico City environs.

It's the kind of Godardian ploy that invites art-house denizens to rhapsodize about "neo-surrealism" in an effort to describe unconventional techniques. (Reygadas has also been arbitrarily compared to directors Andrei Tarkovsky and Abbas Kiarostami.)

Marcos and his wife have kidnapped an infant for ransom, and the child has died in their custody. Racked with guilt, Marcos confesses to Ana (Anapola Mushkadiz), the young, attractive daughter of the general Marcos drives for.

Like Marcos, Ana holds a secret, rebelling against her elite upbringing by working in a seedy brothel. These shared secrets have made them unlikely intimates, with shocking consequences for Ana.

What follows is a nominal quest for redemption, as off-putting as it is oddly compelling. On purely visual terms, "Battle in Heaven" is a marvel, its "story" told through internal perspectives, revealing a desolate state of being that could belong to Marcos or all of Mexico City.

If you dare to see it, prepare for a challenge.