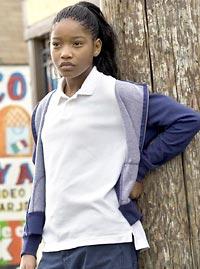 Watch "Akeelah and the Bee" and see something entirely unexpected: a preteen girl stealing a movie from Angela Bassett and Laurence Fishburne. That's not to say Bassett and Fishburne (reuniting for the first time since "What's Love Got to Do With It?") aren't on their game, but that the kid is something special.

Keke Palmer, who's been working in television and movies for the past few years, is a natural on screen. As 11-year-old Akeelah Anderson, the youngest in a troubled South Los Angeles family, she has a sweet and slightly apologetic quality; this is a child who's loved but neglected, who nobody has time for. She's not accustomed to attention and doesn't know quite what to make of it when she gets it.

Doug Atchison's film, unfolding along familiar lines, is the story of how Akeelah finds something that makes her feel special: spelling bees. She's a bright girl who doesn't pay much attention in school but has a knack with words. Nobody knows about her talent until a halfhearted spelling bee takes place at her school. She catches the eye of a local professor (Fishburne), who takes her on as a tutoring project. Soon Akeelah is climbing the ladder of success letter by letter, with eyes on the grand prize: the Scripps National Spelling Bee.

Along the way, Akeelah makes peace with her fiery mother (Bassett, who can do fiery like nobody's business) and finds a few new friends. Atchison drums up a little drama by introducing various conflicts: Fishburne's character's sad secret; a tightly wound bee competitor whose father is contemptuous of Akeelah. But the extra plot devices (and the overdone inspirational score) are unnecessary: There's enough suspense here just in Akeelah's story, and the national spelling bee presents plenty of high-noon drama. Fans of the recent documentary "Spellbound" will find many parallels here, right up to the winning word (the dreaded "logorrhea").

Palmer, smiling shyly in her wire-rimmed glasses, makes an appealing heroine whose smarts turn out to be her savior. Frustrated by Fishburne's discipline early on, she calls him a "dictatorial, truculent, supercilious gardener" before flouncing off; even in her anger, she takes pleasure in words.

Standing on the big stage at the national bee, tapping out the rhythm of the words as she spells them while her family cheers her on, she's finally comfortable — she's traveled a long way but has finally found her home.