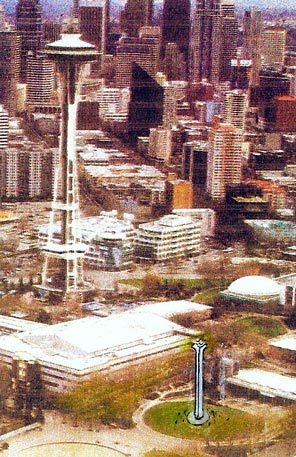 Peace | Lee J. Wexler of Whidbey Island, who taught design at California State University, Los Angeles, for 26 years, proposes a vertical peace memorial of two arms extended to the sky, releasing doves. "This would be a place where people could reflect. The memorial could be illuminated at night and be a focal point in the area that people could see from a distance." (LEE J. WEXLER)
By Stuart Eskenazi
Seattle Times staff reporter

A beautiful lake. A clock tower with water cascading off the sides. A yellow brick road winding its way through the grounds.

Last month, The Seattle Times invited readers to "Design Your Own Seattle Center." About 550 responded with a variety of creative visions — running the course from sophisticated to simple to silly.

The ideas now become part of the discussion as the City Council considers a plan for redesigning Seattle Center over the next few decades."I really appreciate that people took the time to do this," said Councilmember Tom Rasmussen, chair of the Parks & Seattle Center committee. "It's a wonderful indication of people's interest in Seattle Center. We'll look at these ideas and take them as seriously as we would any of the comments we have heard at public meetings."

• Seattle Center should showcase the culture and resources of the Pacific Northwest more than it does now.

• It should feature more water, such as a lake or series of canals.

• It ought to be a place where people can participate in sports, not just watch them.

• The redesign is an opportunity to make a bold architectural statement, a la the Space Needle.

• The Center should reflect and promote ways to build and live "green."

• It must remain a fun place for kids.

Rasmussen said, after viewing a selection of submissions, "It seems to me that everyone wants Seattle Center to be more parklike — not just a place to go when they have a ticket for a performance or event."

Readers submitted their ideas in various forms, from a watercolor painting to written descriptions, with most drawing their designs on a map The Times provided.

Readers of all ages participated, with about half the submissions coming from students doing the redesign as a class project.

Most submissions came from the Seattle area, although a few were sent from unexpected locales, from Paris, Thailand and Brazil to the Clallam Bay Corrections Center.

The Century 21 Committee, a citizens panel appointed by Mayor Greg Nickels, has recommended a $674 million master plan for Seattle Center. It calls for adding 10 acres of open space within the 74-acre campus, achieved mostly through dismantling the Fun Forest and replacing Memorial Stadium with a smaller prep-sports venue that would double as an outdoor amphitheater.

Some readers envision a Center far different from the one the committee is recommending.

A few prefer that the Center return to its 1962 roots as a fairground of innovation that inspires the world. But far more want the grounds to celebrate what makes us distinctively Northwest.

"The Space Needle is a big landmark and the Pacific Science Center reflects our state's scientific advancements, but the rest of Seattle Center is too old and too unoriginal," said Jake Lowry, a sophomore at Cedar Crest High in Carnation, who submitted a design independent of any class project.

Lowry's design features a lake near the International Fountain that "would reflect the Space Needle day and night and create a NW-inspired scene," he wrote in his submission.

A longhouse-style hall on the shore would display the history and culture of Northwest native people and have a cafe. The lake would be stocked with fish that people could catch and then have smoked or cooked in a traditional manner at the longhouse. Visitors could get quick transport from one end of the lake to the other via traditional canoe.

Kelsey Sobczak, a ninth-grader at Northshore Junior High in Bothell, submitted a redesign as part of a class project for her Washington state history class. One feature is a circular building where local coffee companies, including the large Seattle-based chains, would offer tastings much in the way wineries do.

Several readers expressed their desire for local artists and musicians to get more exposure at Seattle Center.

"The Northwest Rooms might be better utilized as artist lofts," Doug Staley of Seattle suggested. "Divided with semi-permanent walls, they could be rented out at reasonable rates to artists that have been displaced by gentrification in Pioneer Square and Belltown."

Miles Johnson of Seattle suggests replacing Memorial Stadium with a lake surrounded by trees. He calls it "Lake Seattle."

"I imagine rowboats and miniature sailboat competitions there during the summer," he wrote.

Several readers want a garden featuring Northwest native foliage. With the futures of Memorial Stadium and KeyArena in flux, several others would replace those spectator venues with spaces where people can exercise.

Jay Wheatley, a game inventor from Seattle, proposes dedicating an area of Seattle Center to a "Cultural Sports Center" where people could be exposed to less-common sporting activities such as racquetball, lawn bowling, curling, pickleball, sand volleyball and bocce ball.

"It would be an opportunity for people to foster a new hobby or passion," he said.

Some readers think it's time to build another vertical landmark at Seattle Center, their ideas ranging from a smaller twin Space Needle to a clock tower with cascading water.

Many like the committee's idea of adding more lawn to Seattle Center. Several also want Seattle Center to set an example in the fight against global warming.

"I would like the Seattle Center to be green, not just lawn green but eco-green," wrote Jean Ameluxen of Vashon Island, whose husband, Fritz, was one of the architects who helped design Seattle Center for the 1962 World's Fair. "Illumination that is solar powered ... benches made of recycled aluminum, rubber or plastic. A gazebo, lighted with solar power. ... The most important thing is to make the Center a place where people can be with and interact with other people in a setting that is an asset to the nature of Seattle."

Some ideas are tongue-in-cheek, such as the "Your Inevitable Seattle Center" redesign by George Glanzman of Seattle. He sites eight Starbucks on the Seattle Center campus, including one at the top of the Space Needle. There's also a solitary Tully's on his map — but it's just outside the Center's border.

An anonymous reader redesigned KeyArena in the shape of the state of Oklahoma — a nod to Sonics owner Clay Bennett, who wants to move the NBA team to his hometown of Oklahoma City.

Several readers took occasion to make political statements. A few demand that the Frank Gehry-designed Experience Music Project be bulldozed (that's not going to happen) and a couple suggest redirecting money for Seattle Center to an Alaskan Way Viaduct rebuild (also not going to happen).

One thing certain to happen is the end of the Fun Forest amusement park, which the City Council voted to shut down after 2009.

That fact prompted this plea from Zoe Russell, a fifth-grader at Lafayette Elementary in West Seattle:

"Dear Whoever Cares: Please keep the Fun Forest because I have my birthday there every year. Including this year and next year and next and next." 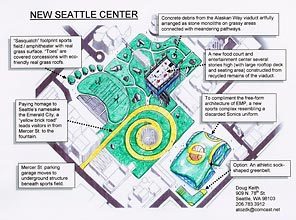 "Sasquatch" | The vision of illustrator Doug Keith of Seattle includes a "Sasquatch footprint sports field/amphitheater with real grass surface. 'Toes' are covered concessions with eco-friendly real grass roofs." In place of KeyArena is "a new sports complex resembling a discarded Sonics uniform" with the option of "an athletic sock-shaped greenbelt." (DOUG KEITH) 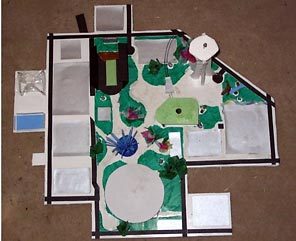 Salmon greeting | Ninth-graders Rose Osborne and Clare Duncan were among several students from Sehome High in Bellingham who submitted redesigns. "In order to revitalize Seattle Center, our plan redesigns five main points of interest and also makes Seattle Center more environmentally friendly. The main entrance would be an interesting path that resembles a river with salmon ... ." (ROSE OSBORNE & CLARE DUNCAN) 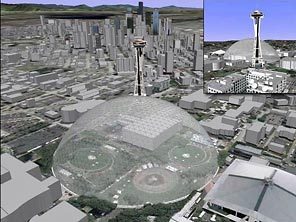 Bubble Center | Jerry McManus of Seattle serves Seattle Center under glass. "Iconic in stature, the Eco Dome would serve as a world-class symbol of Seattle's commitment to finding sustainable solutions on a scale that matches the global challenges we face." (JERRY MCMANUS) 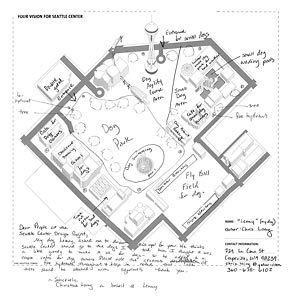 Not just for humans | Christine Laing of Coupeville sent along ideas of her dog, Lenny, a Lab-shepherd mix that was rescued after roaming the New Mexico desert. Now living on Whidbey Island, Lenny enjoys running amok, chasing rabbits and swimming in the ocean. "When a dog goes to the city, he also has to have a place to have fun," Laing explains. (LENNY) 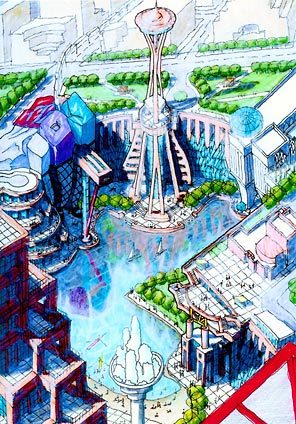 Needle by the lake | A reader on Vashon Island, who wishes to remain anonymous, let his imagination run wild. "We will never dig a great pit and create a lake in the middle of town ... but we can have fun with our imagined momentary control over our urban environment, and the knowing that art and architecture are here for the participation of every one of us." (ANONYMOUS) 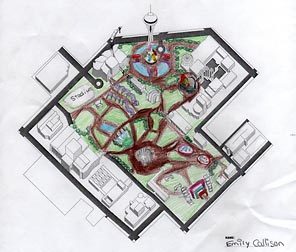 Space Needle bathed in color | Emily Callison, 11, whose family recently moved from Bellevue to Paris, France, wants to enhance the Seattle skyline by bathing the Space Needle in colored light. "My main idea is to have the Space Needle surrounded by water," she wrote. "Then I think it would be beautiful to have boldly colored bridges in all shapes and sizes connecting to the ground under the Space Needle. It would be also amazing to have multicolored lights shining up at the Space Needle and to have them gradually change colors." (EMILY CALLISON)
View an exhibit of reader designs:

See more reader designs and comment on them: seattletimes.com/seattlecenter