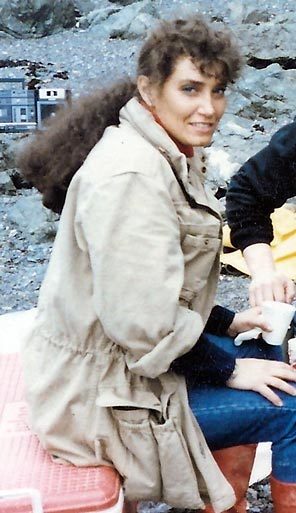 Karena Adler, pictured in 1993, owns the Seattle-based Fishing Company of Alaska, a fleet of boats and Alaskan fishing rights valued at many millions of dollars.
By Jonathan Martin and Hal Bernton
Seattle Times staff reporters

Sixteen years ago in Anchorage, an auction for three factory fishing boats drew a gaggle of lawyers to the courthouse steps.

Auctioneers had hoped to get at least $5 million per boat, but the attorneys balked at the financial risk. As they hesitated, a striking, dark-haired woman in snakeskin boots and a fur coat swept in, made her bids and walked away with two of the ships, at the fire-sale price of $4.5 million for both.

It was an uncommon public appearance for Karena Adler, but an important one. The two boats bought that day in 1991 became workhorses for her Seattle company, The Fishing Company of Alaska, known as FCA. And they helped Adler become one of the most powerful women in Alaska's male-dominated fishing world, with a fleet of seven boats and precious Alaskan fishing rights valued at many millions of dollars.

Yet while shrewdly building her fleet, she has remained an enigmatic character, a stranger whom some competitors call "the Howard Hughes of fishing."

Then last Sunday, one of her company's ships, the Alaska Ranger, sank in the Bering Sea, throwing the entire 47-member crew into the icy waves and killing the skipper and four other men. More deaths were averted only by a harrowing rescue.

Now Adler and her company, and its safety and maintenance history, are front-and-center in an investigation to determine what exactly happened that day and whether it could have been prevented.

Associates, past employees and industry officials describe Adler as a tough, savvy businesswoman but a maverick isolated from the rest of the industry, often at odds with the government, and, like others in the dangerous fishing business, frequently sued over injuries and accidents aboard her vessels.

She maintains tight control on her empire while rarely appearing in the company's offices in Seattle's Lower Queen Anne neighborhood, according to those who know her. Instead, the 55-year-old runs the company by phone and fax from the gated confines of a multimillion-dollar Mercer Island home. She is known to wear scarves and sunglasses even indoors.

"This is the most reclusive woman worth ... millions that you never heard of," said Chris Kuebler, a Michigan attorney who has frequently sued FCA on behalf of injured seamen.

But Adler, who has not spoken publicly since the Ranger sank, also has engendered strong loyalty from a cadre of long-serving crew members, whom she lavishes with bonuses and quiet personal touches, such as sending roses every year to the widow of an employee who was killed at sea.

Close friends describe a warmhearted, caring woman who has been "devastated" by the Ranger disaster.

"Karena Adler, she's blaming herself," said Mike Szymanski, a former Alaska state senator who is FCA's lobbyist. "She can't figure out what she could have done differently. She's beating herself up over it."

Adler was born in New Jersey but attended school in Japan, where she found a gift for languages — she speaks four — and an interest in the fishing industry.

She cast herself into the fishing industry more than two decades ago, shortly after a two-year marriage to Masashi Yamada, a wealthy Japanese businessman 29 years her senior, ended in 1984 in Hawaii. As part of the divorce, her ex-husband gave Adler a seven-acre estate in the hills above Honolulu and paid child support for their young son, Richard, who is now 28 and works for her company.

A year later, Adler and her sister, Stephanie Wilson, opened FCA in Seward, Alaska, and built their houses on either side of the office. Adler bought her first two boats — former tuna seiners — on the cheap at a bankruptcy auction in San Diego in the mid-1980s and had processing factories built below decks. It would become the pattern as Adler expanded her fleet.

"You've got to give her credit for coming from where she did to where she is today," said John Winther, the owner of Ocean Prowler Fisheries in Petersburg, Alaska. "She did it by converting boats. Buying them, converting them and going fishing."

Her timing was also fortuitous. At the time, the Alaska fleet was rapidly expanding, thanks to federal efforts to limit foreign ownership. Adler added "Alaska" to the name of all her boats but maintained close ties to Japanese buyers, according to current and past employees.

She has earned the loyalty of many of her longtime crew through her generosity, said Rosie Szymanski of Seward, one of FCA's first employees. She said Adler in the 1990s donated about $250,000 to upgrade the medical clinic at Dutch Harbor and at Christmas, she is known to send stockings stuffed with Playboy magazines and candy to men at sea, who work grueling hours to bring in the catch that makes FCA's profits.

"If you were ever in need, Karena would be the first to call and it would be taken care of," said Szymanski, who is Mike Szymanski's sister. "She's a different breed of cat, but she loves her crews."

In the early years, Adler's sister, Stephanie, was the more public face of the company, greeting crews on the dock and on boats, said Frank Lemacks, head engineer of the Alaska Ranger in the late 1990s.

"[Wilson] was the people person, pressing the flesh, and her sister lingered in the background, a harder-edged personality," Lemacks said.

For reasons that are unclear, Wilson, who couldn't be reached for this story, left the company in the early 1990s, and Adler has had sole control since then.

"She ruled with an iron fist," said Eric Hollis, FCA's operations manager until 2006, when he quit to become an attorney. "She thinks about this company 24 hours a day, seven days a week."

But that management style has left some former employees bitter and angry. Fishing can be brutal on workers, with 18-hour days and no days off, in dangerous stormy seas, for about $4,000 a month.

"This job was a big mistake — that whole company is bottom feeders," said Rick Weaver, an Oregon man who worked in Alaska for FCA last summer and has sued the company for injuries he says he sustained when crates of frozen fish fell on him.

He alleges the company kept him aboard the processing ship for three weeks despite injuries that kept him bedridden and in pain.

Not a "good old boy"

Adler's fleet of ships — five trawlers counting the Ranger and two long-liners — are part of the "head and guts," or H&G, fishery, which drags the ocean floor for yellowfin sole, rockfish, cod, mackerel and other species. The name of the industry comes from the way the catch is immediately cleaned of the heads, fins and guts while still on board, then frozen and shipped to worldwide markets, often to Japan.

It's a tight-knit corner of the market. But The Fishing Company of Alaska's go-it-alone approach has run afoul of peers and regulators alike.

In 2006, the federal National Oceanic and Atmospheric Administration (NOAA) fined FCA $254,000 for 34 separate violations, including illegally keeping a tank of king crab and halibut, and for not reporting two Northern fur seals killed after being caught in the nets.

The company was also accused of tampering with the records of federal observers, who travel aboard fishing vessels to ensure compliance with fisheries laws. It has appealed the fine, and the case is pending.

Under recently enacted fisheries rules intended to reduce the accidental catch of prohibited halibut and crab, most of the H&G fleet formed a cooperative to divvy up the catch. But FCA has refused to join. Instead, it has sued fisheries managers for what it calls excessive regulation.

Hollis, the former FCA operations manager, said Adler's approach stems from her being a rare woman in the profession.

"From her perspective, you have to go out and fight for fish. It's like survival of the fittest. And the system worked for her."

But that attitude, combined with her reclusive nature, makes FCA a tough company to work with, said Craig Cross, an executive at Aleutian Spray Fisheries in Seattle.

"They've always taken the perspective of looking out for their interest first," he said.

As a privately held company, FCA's financial records are closed, but its portion of the annual H&G catch is estimated at more than $30 million a year at wholesale prices, based on figures from the North Pacific Fishery Management Council. Other ships in other fisheries bring in more revenue.

In addition, the company, through its ships, holds valuable harvest rights issued by the government, that are potentially worth tens of millions of dollars.

The Alaska Ranger alone has been estimated at being worth up to $27 million before it sank. But as FCA has risen in prominence, Adler herself retreated even further.

Friends, most of whom would speak only without being named out of respect for her, said her seclusion increased in part because of a serious medical issue abut 10 years ago. Although she is not registered to vote, she has donated about $13,000 to political causes, mostly the Republican National Committee.

Former FCA employees say they would typically see Adler only a few times a year. Even while communicating with her, they said, they couldn't be sure where she was at the moment. She divided her time among homes in Alaska, Hawaii and Seattle.

"I have been working for the at-sea processors for nearly 20 years, and I have never met her," said Jim Gilmore, lobbyist for a Seattle-based association representing pollock fleets.

She may not be able to stay silent for long. She could be subpoenaed to testify in the inquiry into the Alaska Ranger sinking, which is already bringing unprecedented public scrutiny upon FCA and questions about whether her company's practices contributed to the disaster.

That inquiry began Friday and continued through this weekend in a conference room of the Grand Aleutian Hotel in Dutch Harbor. FCA was represented by a pair of attorneys and company officials.

Adler has not appeared.

Last week, at the gate of her waterfront home on the north end of Mercer Island, a woman answered the call box. She wouldn't say whether Adler was home.

She told the reporter to go away. 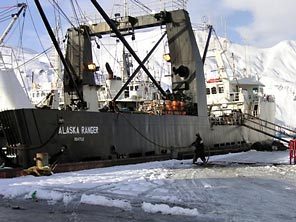 The Alaska Ranger at a port in Dutch Harbor, Alaska. Five died when The Fishing Company of Alaska ship sank in the Bering Sea last Sunday. (JIM PAULIN / AP)