Shortly before 3 a.m. Sunday the Coast Guard in Alaska got a chilling call from a Seattle-based fishing vessel out in the Bering Sea. "Mayday! Mayday! Mayday! ... We're flooding. Taking on water in our rudder room," said a crew member on the Alaska Ranger.

The 189-foot ship — a factory trawler that has withstood decades of tough duty in Alaska waters — was in dire trouble. Though the seas were mild, the ship eventually would go down, claiming the lives of four of the 47-member crew and leaving another missing.

Among the dead was the vessel's skipper, Eric Peter Jacobsen, of Lynnwood. The others were chief engineer Daniel Cook, mate David Silveira, and crewman Byron Carrillo, according to the Fishing Company of Alaska, owner of the ship.

Crew members donned survival suits shortly before 5 a.m. to buy time in the frigid Bering Sea, according to the Coast Guard. Some made it into life rafts while others ended up bobbing in the water.

"When we got on scene there was a spread, at least a mile long, of 13 survivors in Gumby [survival] suits with strobe lights," said Coast Guard Aviation Survival Technician 2nd Class O'Brien Hollow, who was involved in air rescues. "I went down without disconnecting from the helicopter and picked them up one at a time."

An additional 22 crew members were scooped up by the Alaska Warrior, a sister ship to the Alaska Ranger, which then headed back to Dutch Harbor with the survivors.

Other crew members remained on a second boat that was searching the area, about 120 miles west of Dutch Harbor. The bodies of the four dead crew members had been recovered and were aboard the Alaska Warrior.

Coast Guard officials said that the joint rescue was an "incredible accomplishment" that prevented more loss of life.

Few additional details of the events leading up the flooding were available. The swells were only about 6 to 8 feet at the time, although the Bering Sea is known to brew up fierce storms with waves cresting at 30 or even 40 feet.

"We do not have sufficient information to determine why the vessel foundered. We will do everything possible to find out what occurred, with the hope that something can be learned that will be of value to our fishing community," the company said.

Jacobsen, the 66-year-old captain, would have done everything possible to get others off the ship, according to his stepson, Scott Jacobsen, 33, who lives in Bothell.

"My father has always said that a good captain always makes sure he is the last soul off the boat.

Jacobsen said his father was a third-generation fisherman who would spend eight or nine months a year at sea. He was meticulous and a dedicated skipper who in his time ashore liked to rebuild cars and walk the family dog.

Scott Jacobsen said his father urged him to consider a career other than fishing, suggesting instead he should join the carpenters union.

"I was all set to follow in his footsteps," Scott Jacobsen said, but his dad ultimately won out, convincing him that there wasn't much money in fishing anymore.

The Alaska Ranger was heading out to catch mackerel, said Mike Szymanski, a company official. Given the time of day, most of the crew probably would have been asleep when trouble started, Szymanski said.

Jacobsen, Cook and Silveira were the top-tier leaders on the boat and thus would have been responsible for organizing the evacuation and would have been the last to flee, Szymanski said.

Fishing in Alaska has long been a perilous occupation. But in recent years, the deaths have declined, averaging about 11 a year over the past half-decade compared to more than 35 a year back in the early 1980s.

The Alaska Ranger was built in 1973. It is one of seven vessels operated by Seattle-based Fishing Company of Alaska. The firm was founded in 1985, Szymanski said, and is owned by Karena Adler, of Mercer Island.

The ship is part of the "head-and-gut" fleet that scoops up yellowfin sole, mackerel and other fish in trawl nets, then processes and freezes the catch on board.

Company officials and others in the tightly knit fishing communities both in Seattle and Alaska are mourning the loss of life.

"We can replace our boat — but we can't replace the soul, the spirit of those guys that have been working for us for all these years," said Szymanski. "Our main concern now is to take care of the surviving crew and the families that have been impacted by this."

Szymanski said there was no indication of any problems with the vessel before it left Dutch Harbor. Szymanski said Adler keeps in close contact with crews — talking with skippers at port and emphasizing safety.

"Every time one of our boats leaves, she assumes responsibility to ensure that they are going to come home," Szymanski said. "This is just tough, tough to figure out."

Trouble in the past

The Fishing Company of Alaska has had its past problems.

In 1995, a fire aboard another of its boats, the Alaska Spirit, while the ship was moored in Alaska killed the master of the vessel and caused damage estimated at $3 million. The fire prompted the National Transportation Safety Board to issue a series of safety recommendations to 250 domestic fishing and processing ships.

In 1998, the company lost another vessel, the 198-foot Alaska-1, which sank after it collided with a freighter about 34 miles north of Dutch Harbor. All 33 members of that vessel abandoned ship and were rescued without injury or loss of life.

In 2006, the National Oceanic and Atmospheric Administration levied a fine of $254,000 against the fishing vessel, Alaska Juris, and the Fishing Company of Alaska, which managed the vessel. NOAA said the companies had interfered with fishing observers — tampering with or destroying their equipment; failing to provide them a safe work area; and failing to tell them when fish were coming aboard so they could sample the catch.

Coast Guard documents indicate that since 1992 there have been at least nine injuries reported aboard the Alaska Ranger. Records of all nine incidents were not immediately available, but four involved cut or crushed fingers and hands. In a fifth case, an employee was struck by an object while on deck hauling in a net and ended up with a fractured neck. 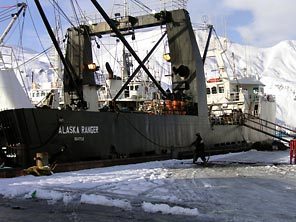 The Alaska Ranger, which began sinking early Sunday in the Bering Sea, is seen at port in Dutch Harbor, Alaska, in January 2006. The Coast Guard said four crew members died and another was missing. (JIM PAULIN / AP) 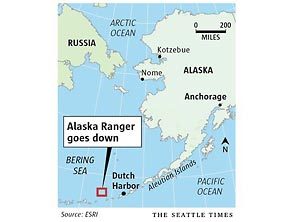 September 2007: 2 die when the Papa George, a sardine siener based out of Seattle's Fisherman's Terminal, rapidly took on water and sank off the coast of Long Beach, Pacific County.

October 2006: 2 men died when the Ocean Challenger, a Seattle-based vessel, capsized near the Aleutian Islands.

April 2001: The Seattle-based Arctic Rose sank, most likely after its inexperienced crew left open a rear hatch, allowing seawater to flood the boat. Fifteen men died that day, making it the worst U.S. fishing accident in more than a half-century.