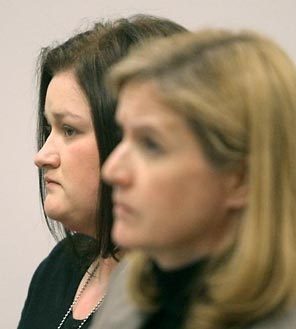 King County District Court Judge Peter Nault called the case one of the "saddest" he'd ever seen in court and one that is likely to have long-term impact on future investigations.

"That we hurry to castigate a person who turns out to be entirely innocent ... I don't know how it could be worse," said Nault, saying the incident will make it harder for real sexual victims to bring their cases forward.

Those statements led to the rape charge last summer against the professor who subsequently spent nine days in jail and was placed on leave from his job.

Clifton declined to comment at the hearing but filed a detailed statement saying that she had been sexually abused by her grandfather, who was convicted of rape of a child in 1994.

"In order to understand why, I have to explain what has happened to me in my past that has forever affected me," she wrote.

Clifton, who now lives in Ellensburg, was sentenced to serve 365 days in jail, with 357 days suspended, and to pay a $5,000 fine, with $4,750 suspended, plus other conditions that include probation and community service. Nault also ordered her to pay the professor's attorney fees.

The professor declined to discuss the charges, saying he wants to put the past behind him, and asked not to be identified.

The King County Prosecutor's Office concedes a mistake was made in the original prosecution but said it was acting on the best information available at the time.

"In hindsight, what was presented to us was an allegation of a violent rape," said Ian Goodhew, deputy chief of staff. "That doesn't mean the investigation stopped."

Clifton was "an extremely articulate and credible victim," said Sgt. John Urquhart, Sheriff's Office spokesman. "There was no reason to suspect she wasn't telling the truth."

The investigation started July 9, when Clifton met with a detective, according to court records.

She described a series of contacts with the professor beginning the previous March. She showed police e-mail messages she said were from the professor which said he had "romantic feelings" and seemed to promise to raise her grade if she agreed "to a few conditions."

Clifton also told detectives the professor "randomly showed up at locations she frequented" at least 15 times.

She said that at 7 a.m. on July 5 the professor went into her Woodinville house and raped her.

On July 10, detectives contacted the professor, who denied all the charges and said he'd never seen Clifton off the school campus. He acknowledged exchanging e-mails with her but said the ones she provided to police had been altered.

The professor was charged with first-degree rape and burglary on July 12. The Prosecutor's Office asked for $500,000 bail, describing the professor as "an extreme threat to the victim and the community."

But as detectives continued working, it became clear that the text in the e-mails had been changed. None of the professor's fingerprints were found at Clifton's house. A sexual-assault examination found no evidence of rape.

The detective also checked on a supposed court order shown by Clifton to people at the college that seemed to bear the heading "In the Superior Court of Washington State for King County" and apparently ordered her not to talk about the professor.

But the judge's signature was illegible and the case number didn't match any King County filings.

On July 25, Clifton told detectives she had forged a judge's signature and made up a legal document on her computer.

On July 26 the charges were dismissed, and a day later Clifton was charged with making false statements to a public servant.

Clifton's attorney, Kelly Faoro, said her client has "extremely deep remorse" for the false statements and realizes that "none of this makes it any better" for the professor.

The professor now has his job back, but said in court documents that the experience would stay with him.

"Even though I did absolutely nothing wrong ... my rape and burglary with sexual-motivation charges, albeit false, will remain in the court records forever," he swore in one filing.

"Other victims will be treated with more scrutiny," she said.