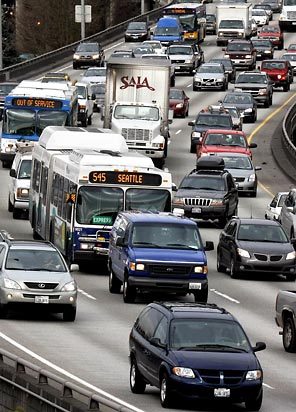 One of the worst bottlenecks in the city is the "Mercer merge," where traffic from Highway 520 westbound has to cross all the lanes of southbound I-5 in the space of a mile to exit on Mercer Street. (JIM BATES / THE SEATTLE TIMES)
By Mike Lindblom
Seattle Times transportation reporter

Lane closures last August on Interstate 5 illustrated the need to get moving on a long-overdue rebuild, to fix the Seattle freeway's eroding surface and unclog its many chokepoints.

But the 2008 Legislature ends today, without an I-5 plan.

Transportation Secretary Paula Hammond didn't push lawmakers for more money, something she earlier had said she would do. State budgets had earmarked $114 million in gas taxes for the Seattle freeway between 2017 and 2023, but Hammond thought a decade was too long to wait.

"What I want us to do is come up with a good plan, and then what I want to do is sell this to the Legislature," she said last summer.

Hammond said she still thinks a 10-year delay is unacceptable, but political realities kept her from crusading for I-5 money. "Everyone and their brother was making clear we aren't getting any more revenue this year, so don't even ask," she said.

Lawmakers were preoccupied during a short session with how to apply tolls to the Highway 520 corridor.

And studies on how to improve I-5 traffic aren't done yet. "Until we have that solution, it's a little half-baked to go to the Legislature and get a one-off decision," Hammond said.

Not only is the money far off, but leaders have no idea how to raise the $2 billion the Department of Transportation says is needed to tackle all of I-5's needs, from Northgate to the south city limits.

Long stretches of the freeway, mainly in the North End, are rated "extremely poor" because they are cracking or the concrete has worn down to exposed rocks, DOT says. Traffic jams will likely worsen without some lane improvements, such as making the merges easier near Highway 520, or widening the two-lane section northbound at Seneca Street.

Interstate 5, built in the mid-1960s, is the transportation core of the state, carrying well over a half-million vehicles a day in Seattle alone. Like many roads, it suffered from under-investment in the 1980s and 1990s. In the 2000s, politicians steered money to suburban and rural lane expansions.

Seattle leaders focused mainly on replacements for the Alaskan Way Viaduct and Highway 520 floating bridge, each vulnerable to earthquakes.

Lawmakers approved 14 ½ cents a gallon in new gasoline taxes in 2003 and 2005 to try to move ahead with more highway projects, yet officials say they've already run into a $3.8 billion shortage in their 16-year budget.

High gasoline prices mean some drivers are buying less gas than predicted, limiting revenues. Also, the agency guessed wrong in early 2005 about the size of cost increases for construction labor, concrete and steel. Some projects have been delayed two years, Hammond said.

Rep. Mike Armstrong, R-Wenatchee, said in a floor debate that money shortages have already led the state to sell bonds for road projects, so money will only get tighter next decade, making future projects uncertain. "If we have a project funded after 2013 in this budget, I wouldn't take it to the bank and tell my constituents the project is actually being built," he said.

Still, most of more than 400 gas-tax projects around the state are getting done, said House Transportation Chairwoman Judy Clibborn, D-Mercer Island. Examples include freeway widening in Tacoma and Everett.

This year's Legislature moved money for some projects into the 2020s, because those depended largely on regional taxes that voters rejected last fall: an I-405 widening from Bellevue to Renton, a Highway 509 link to I-5 in SeaTac and a Cross-Base Highway in south Pierce County — all of which were part of the losing Roads & Transit measure last year. East of Snoqualmie Pass, three Interstate 90 projects won't be funded until the late 2010s.

Despite the budget crunch, I-5 in Seattle is still on track for $21 million in urgent surface repairs next year — "the tip of the iceberg," said DOT spokesman Greg Phipps. These include concrete smoothing or replacement in the North End and near the Michigan Street exit.

Another $25 million from the viaduct fund was reserved last year to improve traffic flow on I-5, because future viaduct lane closures will put pressure on the freeway.

One option calls for electronic signs to display reduced speed limits at certain times. For example, if a lane is blocked downtown, northbound traffic speeds could be lowered to 30 mph at Boeing Field, so that cars flow steadily, instead of meeting stop-and-go traffic. Other ideas include sometimes using shoulders as bus lanes, or restriping the express lanes so transit could always have a lane in both directions. Perhaps a "high-occupancy-toll" lane can be created where solo drivers pay to enter a high-occupancy-vehicle lane, Hammond said.

Long term, Clibborn said "I have no idea" where to find $2 billion for I-5.

Hammond said she doesn't see higher gas taxes as an answer, and the regional car-tab tax in Roads & Transit failed last fall. That leaves tolls on a variety of highways, to be introduced very gradually. "You can't cram tolling down people's throats too thick, in a way that isn't sustainable. You have to take baby steps," she said.

Whenever leaders or voters provide more money, Clibborn said, projects can always be returned to the fast track. 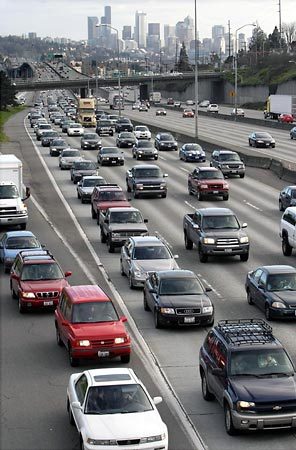