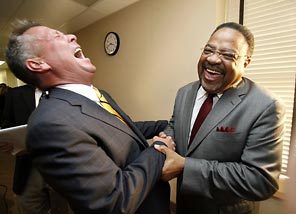 In a shocking upset Friday, Boeing lost the long-awaited and lucrative Air Force refueling-tanker contract to a competing bid based on an Airbus plane.

The Pentagon chose Northrop Grumman, partnered with Airbus parent EADS, to build the next generation of Air Force tankers, a contract worth an estimated $40 billion.

Boeing's loss means the 767 assembly line in Everett will wind to a close around 2012 when the current commercial orders run out. No layoffs are likely, though, as the roughly 600 production workers plus supporting engineers will transfer to other programs, including the 787 Dreamliner.

But Washington state has lost out on the chance to add as many as 2,000 jobs locally at Boeing — and perhaps more than 6,000 new jobs overall.

Instead, those jobs will go to Europe and Alabama.

Large sections of the Northrop/EADS tanker will be built in Europe; they will be shipped across the Atlantic for assembly at a new widebody-jet plant to be built in Mobile, Ala., which will gain some 1,500 direct jobs.

At the Pentagon news conference, Air Force acquisitions chief Sue Payton said categorically that the creation of jobs in the United States was not a factor in the decision.

Payton said the only considerations were "the requirements of the war fighter" balanced with "the best interests of the taxpayer."

"We are outraged that this decision taps European Airbus and its foreign workers to provide a tanker to our American military," said a statement from Washington state's entire congressional delegation. "This is a blow to the American aerospace industry."

EADS plans to build commercial A330 freighters in Mobile in addition to the military tanker airplanes — enabling Alabama Gov. Bob Riley to boast that the U.S. will soon have a new center for assembly of big commercial jets, in direct competition with the Puget Sound region.

"There are only two places in the world where large airplanes are built: Seattle, Washington, and Toulouse, France. Now, there will be a third: Mobile, Alabama," Riley said. "To say this is a great day for Alabama is a monumental understatement."

Gen. Arthur Lichte, head of the Air Mobility Command, insisted at the news conference that "this is an American tanker. Flown by American airmen."

"It'll have a great big American flag on the tail," he said.

The Northrop/EADS tanker, based on the Airbus A330, is considerably larger than the Boeing 767 offering. And although Boeing included an advanced cockpit and numerous other updates in its tanker proposal, the A330 is a more modern airframe — the jet first entered service in 1994, 12 years after the 767.

Analyst Loren Thompson of the Lexington Institute said size may have been a deciding factor.

Government sources told Thompson the Northrop/EADS plane won out because of "superior air-refueling and airlift capability, enabling it to carry out specified [combat] scenarios with fewer aircraft."

Paul Meyer, Northrop's vice president of Air Mobility Systems, said his team also offered "a very aggressive price, because we wanted to be in this market."

"All those Christmas parties they paid for. That big Washington office," Aboulafia said. "Really, really worth it."

But the tanker is much more significant.

The contract calls for development, production and maintenance of 179 tankers to replace old Boeing-built KC-135 airplanes. Two follow-on contracts to replace the rest of the 530-plane fleet are expected to be put out for bid in coming years.

"This is more than just a crack in the dam," Aboulafia said. "This is water pouring through the dam."

The Air Force selection breaks Boeing's monopoly on the supply of large air tankers to the U.S. military. Such tankers — which connect via flexible hoses and rigid booms to fighter jets and bombers in flight, enabling them to refill their gas tanks on long-range missions — are central to projecting U.S. air power across the globe.

"These tankers will provide an air bridge to defend our national interest ... anywhere on the planet," said Air Force Secretary Michael Wynne.

The selection of an airplane designed and largely built in Europe breaks new ground in the world of defense contracts and is a mighty blow to Boeing's prestige.

But the financial impact of the tanker contract would not have been huge.

The revenue, spread out over a couple of decades, is relatively small compared to Boeing's annual revenue of more than $60 billion.

And at peak production only 12 to 18 tankers will be built per year. Without the tanker, Boeing may still deliver more than 150 widebodies a year from Everett once 787 Dreamliner assembly ramps up.

Still, winning the tanker competition had come to loom very large in the Boeing psyche.

Boeing may appeal the tanker decision, but at the news conference Lichte asked that the loser not do "anything that would slow down the war fighter."

Payton, the Air Force acquisitions chief, said the procurement scandal was not a factor in the decision. She said the selection process had been thoroughly reviewed both inside the Pentagon and by the Government Accountability Office as "extremely open and transparent."

"We have had a very thorough review of what we are doing," Payton said. "We have it nailed."

Still, one possible avenue of protest concerns a late change to the computer model the Air Force used to assess the performance of the competing airplanes.

Northrop's Meyer said his team was initially "disturbed by the timing" of the change but was persuaded that the adjustment was more accurate and "closer to our own analysis."

Boeing won't comment on any possible protest of the decision until after its full Pentagon debriefing.

"Obviously we are very disappointed with this outcome," said Boeing spokesman Bill Barksdale in a statement. "We believe that we offered the Air Force the best value and lowest risk tanker for its mission.

"Our next step is to request and receive a debrief from the Air Force. Once we have reviewed the details behind the award, we will make a decision concerning our possible options, keeping in mind at all times the impact to the warfighter and our nation."

Boeing stock ended regular trading Friday down $2. After the Pentagon announcement, it dropped a further $3 in after-hours trading to $79.75. 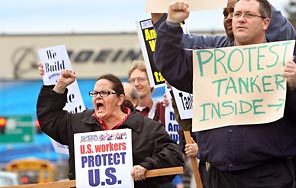 Aerospace workers including Sandy Hastings, left, protest Friday outside the Machinist Union Hall in Everett after finding out that Boeing had lost the Air Force refueling-tanker contract. The loss means that the 767 assembly line in Everett will close around 2012 when the current commercial orders run out, but no layoffs are likely. (MIKE SIEGEL / THE SEATTLE TIMES) 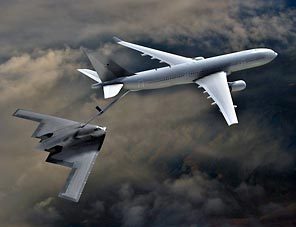 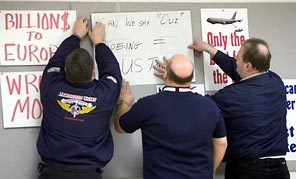 Machinists union representatives put posters up in their union hall in Everett on Friday afternoon decrying the fact that the refueling-tanker contract had been awarded to Northrop/EADS. EADS is the parent of European aircraft-maker Airbus. (MIKE SIEGEL / THE SEATTLE TIMES)

Boeing: What the loss means

• No surge in hiring; the contract would have created several thousand local jobs.

• The tanker franchise that Boeing has held for 50 years goes to a competitor.

Airbus/EADS: What the win means

• It also gets a U.S. base where it will assemble commercial jets.