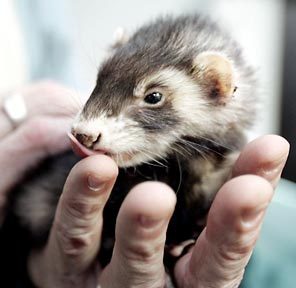 Josey the ferret is one of 14 critters now living at the FitzPatricks' in-house shelter. (COURTNEY BLETHEN / THE SEATTLE TIMES)
By Lisa Wogan
Special to The Seattle Times

Michael FitzPatrick runs his fingers up and down the long, thin belly of a nearly four-pound white ferret named Pugsley like he's playing an accordion. Three other creamy white and brown ferrets — Houdini, Buddy and Bonkers — explore open pant legs with twitching noses and tickly claws or disappear inside plastic tubes. In cages equipped with litter boxes, water dispensers and secondhand sweaters, still more ferrets sleep in hammocks and wait for their turn to play.

In all, 14 ferrets live on the second floor of this small cabin on Vashon Island, home of Ferret Shelter Northwest. At the center in a ferret baseball cap and slippers — essential footwear for living with small, curious and quick critters — Michael is "alpha ferret," in the words of Miriam FitzPatrick, his wife and partner in the effort.

Their homespun shelter is a typical ferret rescue: The love of single ferret becomes an all-encompassing effort to help this misunderstood and high-maintenance member of the weasel family.

If you're surprised to learn that ferrets need rescuing, consider this: There are 1.9 million ferrets in the United States, according to the American Pet Products Manufacturers Association. And though the number is tiny compared to the 74.8 million dogs and 90 million cats kept as pets, ferrets face many of the challenges of their more popular brethren without the high profile.

More ferrets are abandoned, neglected and given up every year. Terri Noren, who started Little Dudes Ferret Ranch in North Bend in 2004, took in 30 ferrets that first year and more than 80 two years later. "We expect that if pet stores continue to sell ferrets, it won't be long before they are euthanized just like dogs and cats," says Noren, who currently focuses on hospice care for geriatric and terminally ill ferrets. "Right now, many shelters are overwhelmed."

Rescuers cite uninformed, impulse purchases as the key problem. "Too many people want the cute playful kit [youngster], but when they get older or if they have a health problem, they don't want to keep them," says Denise Cummings, who established Denise's Delightful Dookers and Ferret Rescue in Auburn in 2006. She routinely logs 17-hour days between her job as a secretary and running a ferret rescue.

Part of the problem is that ferrets are high-maintenance. They can bite if not trained properly. Cummings' first "dooker" (named for the sound ferrets make when they get excited) bit her hand through to the bone more than once. They are curious and can get crushed in sofa beds and disappear into walls, so new owners have to ferret-proof their homes. They take to litter-box training with varying degrees of success. And although they sleep around 18 hours a day, they require lots of interaction with their people and other ferret buddies when they are awake.

All that considered, it's tough to see how they got so popular in the first place. But ferrets have been domesticated for thousands of years. They were used to hunt rabbits in ancient Rome and may have been pets or guarded grain stores in ancient Egypt. (A reminder that they aren't rodents, a common mistake. They are actually related to otters, badgers and skunks.) They are cute, quirky, clumsy and affectionate.

"Like perpetual 2-year-olds," Miriam FitzPatrick says. When they get wound up, they dance on their back legs in the weasel war dance.

"They were just like my therapy," says Vashon Islander Shelley Calabrese, whose two ferrets — Sandman and Houdini — went to the FitzPatricks after the Calabreses' home caught fire. "The way they could change my mood around."

Sandman was diagnosed, and eventually died from, a fungus so rare his veterinarian hopes to submit a paper about him. But the long process and expense of diagnosing and treating Sandman, including two surgeries, was no surprise to the FitzPatricks. They refer to their work as hospice care, and talking to them does feel a little like an afternoon at a critical-care ward.

The idea of hospice may seem a little strange to cat and dog people but not ferret rescuers. Middle-aged by 3 or 4 years old, ferrets are prone to a raft of illnesses, including influenza caught from humans. Adrenal disease, pancreatic tumors and cancer are among regular, serious health conditions in ferrets that some believe are caused by premature spaying or neutering and artificial lighting. Treatment is expensive and time-consuming, requiring frequent hand-feeding, medicines, vet visits and special care, which at the FitzPatricks sometimes just means carrying a terminally ill ferret in a fleece pouch for hours on end.

For this reason, placing ferrets of a certain age is tough. Foster homes often become permanent. (The Washington Ferret Rescue and Shelter in Kirkland does cover medical costs for permanently fostered ferrets.) Health challenges perhaps more than anything are what make ferret rescue an emotionally wrenching and financially taxing avocation.

"Publicly owned ferret shelters don't exist. They are owned by individuals who get stuck with expensive vet bills," says Lisa Vible of the American Ferret Association in Annapolis, Md. "People don't realize how bad it can get. I've heard of people losing their homes."

The FitzPatricks know all about that.

"Right now we're thousands of dollars in personal debt on our credit cards due to vet bills," Michael says. He and his wife support themselves and the shelter through an entrepreneurial hodgepodge, including balloon-twisting at events, publishing seasonal Pike Place Market guides, small-time video production, rummage events and selling stuff on eBay. Michael has also helped offset bills by selling his personal collection of sports memorabilia and rock and pop festival posters that he collected off telephone poles as a kid in Southern California.

"We can have a down day, up against finances, whatever, times that can practically bring you to tears," he says. "And you can let someone like Pugsley out, and it just picks you up. It's like, you know, somehow we'll make it."

Lisa Wogan is a frequent contributor to The Seattle Times: vietato@msn.com 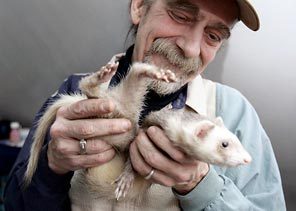 Michael FitzPatrick, holding Ben, and his wife have turned their Vashon Island home into the Ferret Shelter Northwest. (COURTNEY BLETHEN / THE SEATTLE TIMES)