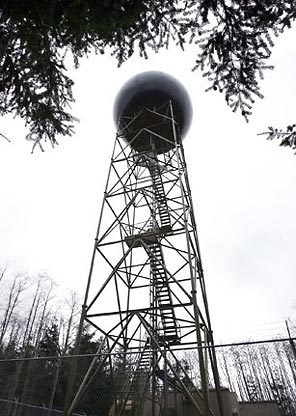 But even though approaching storms are examined by satellite, radar, weather buoys and other equipment, a University of Washington scientist says a "blind spot" in the region's radar coverage prevents forecasters from getting the best possible look at weather headed our way.

"It's pretty outrageous, really," said Cliff Mass, a UW professor of atmospheric sciences. "Significant systems come in, and we don't really have a good look at them."

Mass said utility managers, emergency crews and the general public are shortchanged by what he calls "the worst coastal weather-radar coverage in the continental U.S."

Mass, weather forecaster for KUOW's "Weekday" radio program, has campaigned for years for the addition of a Doppler radar station on the Washington coast and says the need has never been greater, nor has the potential benefit of the information it would generate.

The existing radar station on Camano Island, Mass says, is blocked by the Olympic Mountains from seeing the low-elevation portion of storms approaching the Washington coast. Those storms sometimes carry intense bands of rain.

Officially, the Weather Service has been cool toward the addition of a coastal radar station, questioning its need. But the idea is gaining political support: U.S. Sen. Maria Cantwell's staff members say she'll advocate a coastal radar in hearings next month of a subcommittee she chairs that reviews the budget of the Weather Service's parent agency, the National Oceanic and Atmospheric Administration (NOAA).

"We're actively trying to fix this problem," said Ciaran Clayton, spokeswoman for Cantwell. "The ability to predict within reason the severity of a storm, and let communities know what they're in for, is critically important."

Mass estimates the price of adding a radar station at Westport, Grays Harbor County, would be about $4.5 million — small compared with the toll exacted by major storms. Last December's storms, which killed several state residents, did damage that could top $1 billion, according to estimates from Gov. Christine Gregoire.

Mass said current forecasts of incoming storms rely too much on satellite images. "Satellites look down and see the storm from the outside," he said. "But to really know what's going on, you have to be able to look inside. It's like trying to diagnose a patient without the ability of an X-ray or MRI."

Information gathered by radar, coupled with new technology, could create detailed computerized models to predict the effects of a storm, Mass said.

Storms in December 2006 and December 2007 carried particularly heavy bands of rain. The Dec. 3, 2007, storm dropped more than 5 inches of rain in parts of Seattle, and even more in some other cities, taking local officials by surprise.

"Nobody saw that coming," said Nick Pealy, deputy director of field operations and maintenance for Seattle Public Utilities. "We don't have any good information that allows us to predict when rainstorms are coming, where they're going to hit or how much rainfall they're carrying."

The early notice a coastal radar might provide, Pealy said, could give the city a chance to warn residents in the path of a storm, position crews to check affected drains and deploy supplies and equipment, such as sandbags and pumps, to help cope with a deluge.

It's not clear if advance notice of heavy rains could have prevented the chain of circumstances, including the collapse of a retaining wall, that led to the December 2006 drowning death of Kate Fleming in the basement of her Madison Valley home. But the utility has implemented an "autodialer" system in Madison Valley to warn residents of heavy rains that could trigger floods, and it is examining whether to expand that to other neighborhoods.

Brad Colman, meteorologist in charge of the Weather Service's Seattle forecast office, said a coastal radar could be "a welcome tool," although the agency's official position is that the existing network of Doppler sites is adequate.

The locations were chosen in the early 1990s to meet the combined needs of the Weather Service, Federal Aviation Administration and the Department of Defense. The Camano Island location, Colman said, was chosen because of the view it offers of the Puget Sound area's population centers and airports. At McChord Air Force Base, officials use Doppler radar to gauge the timing, movement and size of thunderstorms to aid in decisions such as when to move the base's aircraft and other support equipment into hangars.

Colman said NOAA officials are concerned that if Congress decides a radar station is desirable but doesn't provide sufficient funds to install, operate and maintain it, it could become an "unfunded mandate" competing against other priorities in the Weather Service's budget.

He said storms approaching the Washington coast are examined not just by satellite but also by high-altitude radar and by offshore buoys, which transmit information on winds, temperature, barometric pressure, and the height and direction of waves and swells.

"We would certainly welcome a coastal radar and it would undoubtedly help in our forecast process," Colman said. "It wouldn't be an immediate panacea or silver bullet. It would be another tool in the toolbox."

Support for a coastal radar is particularly high among officials in coastal communities.

"We're blind without it," said Paul Easter, emergency-management director for Grays Harbor County, which is routinely battered by winter storms. "We've been told by weather services that many times they are unaware of what we're going to be faced with until it hits land," Easter said. "And basically, we're the land that it hits."