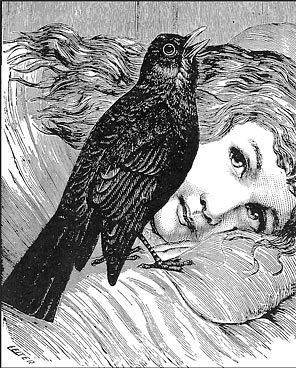 Cooper Edens' next compilation for Classic Illustrated Editions, "Animal Stories," will include extras, such as lyrics from the Beatles' "Blackbird," to accompany illustrations. (CHRONICLE BOOKS)
By Michael Upchurch
Seattle Times book critic

He's a big man, with flyaway hair and a fair-sized pot belly that both seem only to heighten his restless energy. He's wearing bright red trousers and a dark blazer that make him look like an overgrown schoolboy in extremely felicitous disgrace.

And he's enthusiastic about everything — about the movies and ballets that might be made from his books; about the potential return of "the glory days" for children's picture books after the craze for chapter books ushered in by Harry Potter; about his Amelia Earhart doll in her white aviatrix uniform (with white parachute attached).

It would be tempting to dismiss him as a genial madman, a little full of himself — except he does have something to crow about, as an author and illustrator ("If You're Afraid of the Dark, Remember the Night Rainbow") and as a collector and compiler of work by classic children's book illustrators.

In his lovingly packaged "Classic Illustrated Editions," published by Chronicle Books, Edens draws on his vast knowledge of children's illustrators of the past 150 years to offer variety-packed editions of "Peter Pan," "Alice in Wonderland," "Pinocchio," "A Child's Garden of Verses" and other classics.

His sometime collaborator Harold Darling cites Edens' "fresh vision" and "tremendous memory" as crucial in his tracking down of long-forgotten pictures and finding "ingenious ways of putting them before the public again." It is, Darling says, as though Cooper were "born for the task."

René Kirkpatrick, manager-buyer for All for Kids Books and Music, agrees that Edens does "a brilliant job" on the Classic Illustrated Editions. She says they're the kind of book you can sit down with for hours, looking at the illustrations. "We sell more to adults than we do to kids," she adds, "because parents and grandparents remember the artwork." Edens' latest Classic Illustrated Edition, "Tales from the Brothers Grimm" (Chronicle, 145 pp., $19.95), includes illustrations by masters such as Gustave Doré, Margaret Tarrant, Arthur Rackham, Maxfield Parrish, Edmund Dulac and Kay Nielsen, as well as anonymous artists he discovered in old British periodicals. The book serves as a kind of prism, through which you can see the different ways artists have envisaged Cinderella, Hansel and Gretel, Rumpelstiltskin, Rapunzel and other folktale and fairy-tale icons over the years.

He appears to have invented a new genre. Maybe that shouldn't come as a surprise — because Edens, 62, also invented his own name.

A surplus of imagination

Born Gary Drager, he grew up on the shores of Lake Washington in the Rainier Beach neighborhood."We lived in a lake fantasy," he remembers fondly. His grandmother lived next door to the family and would often take her grandson downtown to the old Bon Marché (now Macy's) where she would "reward" him with "toys galore and children's books, which were mostly Dr. Seuss."

She also had a great collection of Victorian children's books, including all the L. Frank Baum books. Edens says,"She really did inspire me with her pies and her books."

When he reported for the first grade at Emerson Grade School, he was sent home by the principal, who called his mother to tell her her son had too much imagination.

During his enforced sabbatical, Edens went on a coloring-book craze: "I was coloring color-books like no one ever colored Roy Rogers coloring books. I would color Roy Rogers purple and Trigger green ... I would paint Hopalong Cassidy. But after a while I started painting things out of the head. And then I got hold of Monet and van Gogh. I mimicked them."

At first he exhibited his own artwork under his real name. But as he moved into a fantasy vein, "Gary Drager" didn't seem a good fit. Borrowing his mother's and grandmother's maiden names, he came up with "Cooper Edens."

His start in the book business came in the 1970s, when he carted his illustrations for "The Starcleaner Reunion" (eventually his second book) from one New York publisher to another. Someone steered him toward San Diego's Green Tiger Press, run by Harold and Sandra Darling (the latter now better known as Alexandra Day, author of the "Good Dog Carl" children's picture books).

The Darlings manufactured a popular series of picture postcards, drawing from their own collection of vintage books, using images — largely from the Victorian era — that were in the public domain. Edens credits the Darlings with bringing Arthur Rackham and other great British children's illustrators to American attention. The Darlings embraced Edens' work, too, and started publishing it.

Soon the Darlings' collecting mania rubbed off on Edens. He had always collected old illustrated books "because I wanted to draw like that."

But "Mr. Darling," as Edens calls him, took his interest to another level: "He was an avid bookstore junkie, and he'd go all over the world, mostly England, finding $30 books that were worth a thousand dollars. So I followed him."

Between them they created a shared collection of books and images that's called Starsnap when Edens uses it and Blue Lantern when Darling uses it. "It's all the same collection," Edens says.

In the early 1990s, the Darlings moved to Seattle, where they opened a shop called the Laughing Elephant in the Pioneer Square neighborhood, now located in Fremont.

The inspiration for Edens' first "compilation" was "Beauty and the Beast." The tale had spawned so many interpretations of what the beast looked like that Edens felt it would be fun to gather all the variations in one volume. The result was a picture book published by Green Tiger in 1989, in which the beast is alternately wolflike, lionlike, walruslike and warthoglike. Beauty keeps changing, too — from blond to brunette to redhead.

He and Harold Darling then set to work on "Alice in Wonderland." Together, they owned or had access to every "Alice" ever illustrated.

"What a feeling!" he recalls.

However, the resulting volume, published by Bantam Books, was disappointing commercially, and eventually Edens wound up making a connection with Chronicle Books, where he's stayed ever since, averaging a couple of Classic Illustrated Edition books a year.

He delights in reviving the reputations of once well-known children's illustrators: H. Willebeek Le Mair is one name he throws out. Another is Eulalie (no last name) who had her heyday in the 1930s: "Mr. Darling and I ... heard that Eulalie was still alive. 112 years old! We went and talked with her, and I promised her that I would put her on a cover. And I accomplished that, but she passed away."

Edens' next compilation, "Animal Stories," will feature an illustration by Eulalie on its front dust jacket.

A more special sense of mission arises when he's scouring through those old children's periodicals for artistic gems by uncredited artists. .

"Sometimes [the originals are] just in terrible shape. But it thrills me that, if I don't discover this picture, no one will ever see it — that I am the last guy in the dike."

In the past couple of years, Edens has been stretching the boundaries of what Classic Illustrated Editions encompass. In last year's "Sea Stories," for instance, he turned to the fine arts — Winslow Homer, Childe Hassam — for some of his illustrations, and included pop-song lyrics and excerpts from nonchildren's writers (Hemingway, Melville).

In the upcoming "Animal Stories" (due in June) he includes lyrics to the 1930s classic "Teddy Bears' Picnic" and the Beatles' "Blackbird," and an excerpt from Edgar Allan Poe's "The Raven," along with more usual children's fare.

Edens has still more unusual things in mind for future projects, including something called "Monsters Under Lock and Key" — which won't be a book in the ordinary sense.

"I'm seeing a big jump here," he says, envisaging a collection about monsters and villains, including Count Dracula, Captain Hook, King Kong, the queen from "Snow White" and the wolves from "The Three Little Pigs" and "Little Red Riding Hood."

They won't be in a book that you read from cover to cover, however.

"They're all going to be portraits," Eden says, "and then the cover is going to be a cage. But you'll have a key come with it, so children will be able to unlock the portraits. Won't that be great?" 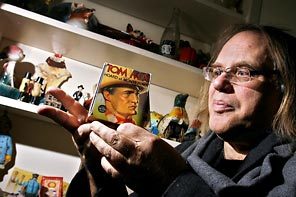 This Tom Mix book is among Cooper Edens' collectibles. He scours old children's periodicals for lost gems by uncredited artists. "Sometimes [the originals are] just in terrible shape," he said. "But it thrills me that, if I don't discover this picture, no one will ever see it &#8212; that I am the last guy in the dike." (DEAN RUTZ / THE SEATTLE TIMES) 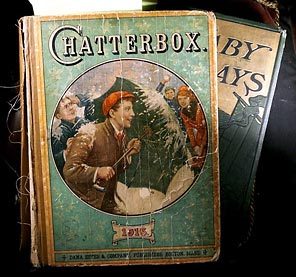 Well-worn and frayed at the edges, these Chatterbox books are among Cooper Edens' treasures. (DEAN RUTZ / THE SEATTLE TIMES) 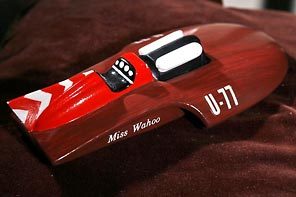 This replica of the Miss Wahoo is part of Cooper Edens' collection. He grew up on the shores of Lake Washington. (DEAN RUTZ / THE SEATTLE TIMES)

Cooper Edens: Page through many of Cooper Edens' books on his publisher's Web site, www.chroniclebooks.com. Search for Cooper Edens.