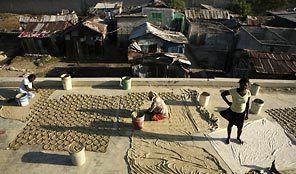 Haitians make mud cookies on the roof of Fort Dimanche, once a prison, in Port-au-Prince in November. Women strain out rocks and clumps from the dirt on a sheet and stir in shortening and salt. Then they pat the mixture into cookies and leave them to dry in the sun. (ARIANA CUBILLOS / AP)
By Jonathan M. Katz
The Associated Press

PORT-AU-PRINCE, Haiti — It was lunchtime in one of Haiti's worst slums, and Charlene Dumas was eating mud.

With food prices rising, Haiti's poorest can't afford even a daily plate of rice, and some take desperate measures to fill their bellies.

Charlene, 16 with a 1-month-old son, has come to rely on a traditional Haitian remedy for hunger pangs: cookies made of dried yellow dirt from the country's central plateau.

The mud has long been prized by pregnant women and children here as an antacid and source of calcium. But in places like Cité Soleil, the oceanside slum where Charlene shares a two-room house with her baby, five siblings and two unemployed parents, cookies made of dirt, salt and vegetable shortening have become a regular meal.

"When my mother does not cook anything, I have to eat them three times a day," Charlene said. Her baby, named Woodson, lay still across her lap, looking even thinner than the slim 6 pounds 3 ounces he weighed at birth.

Though she likes their buttery, salty taste, Charlene said the cookies give her stomach pains. "When I nurse, the baby sometimes seems colicky too," she said.

Food prices around the world have spiked because of higher prices for oil, needed for fertilizer, irrigation and transportation. Prices for basic ingredients such as corn and wheat are also up sharply, and the increasing global demand for biofuels is pressuring food markets as well.

The problem is particularly dire in the Caribbean, where island nations depend on imports, and food prices are up 40 percent in places.

The global price increases, together with floods and crop damage from the 2007 hurricane season, prompted the U.N. Food and Agriculture Agency to declare states of emergency in Haiti and several other Caribbean countries. Caribbean leaders held an emergency summit in December to discuss cutting food taxes and creating large regional farms to reduce dependence on imports.

At the market in the La Saline slum, two cups of rice now sell for 60 cents, up 10 cents from December and 50 percent from a year ago. Beans, condensed milk and fruit have gone up at a similar rate, and even the price of the edible clay has risen over the past year by almost $1.50. Dirt to make 100 cookies now costs $5, the cookie makers say.

Still, at about 5 cents apiece, the cookies are a bargain compared with food staples. About 80 percent of people in Haiti live on less than $2 a day and a tiny elite controls the economy.

Merchants truck the dirt from the central town of Hinche to the La Saline market, a maze of tables of vegetables and meat swarming with flies. Women buy the dirt, then process it into mud cookies in places such as Fort Dimanche, a nearby shantytown.

Carrying buckets of dirt and water up ladders to the roof of the former prison for which the slum is named, they strain out rocks and clumps on a sheet, and stir in shortening and salt. Then they pat the mixture into mud cookies and leave them to dry under the scorching sun.

The finished cookies are carried in buckets to markets or sold on the streets.

A reporter sampling a cookie found that it had a smooth consistency and sucked all the moisture out of the mouth as soon as it touched the tongue. For hours, an unpleasant taste of dirt lingered.

Assessments of the health effects are mixed. Dirt can contain deadly parasites or toxins, but can also strengthen the immunity of fetuses in the womb to certain diseases, said Gerald N. Callahan, an immunology professor at Colorado State University who has studied geophagy, the scientific name for dirt-eating.

Haitian doctors say depending on the cookies for sustenance risks malnutrition.

"Trust me, if I see someone eating those cookies, I will discourage it," said Dr. Gabriel Thimothée, executive director of Haiti's health ministry.

Marie Noël, 40, sells the cookies in a market to provide for her seven children. Her family also eats them.

"I'm hoping one day I'll have enough food to eat, so I can stop eating these," she said. "I know it's not good for me." 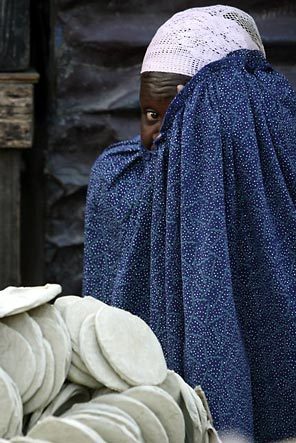 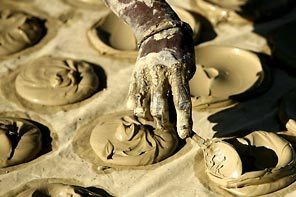 The hand of a woman is covered in mud as she makes mud cookies on the roof of Fort Dimanche in November. A market vendor, right, covers her face as she sells mud cookies at the La Saline market in Port-au-Prince last week. (ARIANA CUBILLOS / AP)

These agencies accept contributions for the poor in Haiti:

InterAction, a coalition of aid agencies, lists other agencies that take contributions to help Haiti's poor. Call 202-667-8227 or go to www.interaction.org.