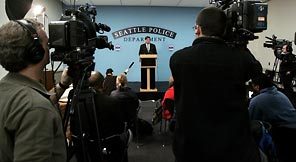 James Anthony Williams, 48, released from prison last year after shooting a stranger at a bus stop, was linked to Harps' murder through DNA, police said at a news conference.

A source familiar with the investigation said DNA evidence came from a knife and from beneath Harps' fingernails. Midday Friday, the state crime laboratory told Seattle police that Williams' DNA matched.

Detectives quickly found Williams in King County Jail — he was arrested Jan. 16 after missing a required appointment with a mental-health provider — and arrested him on suspicion of murder.

The Seattle Times generally does not name suspects until they have been charged. Williams is being named because of the high-profile nature of the slaying, his criminal background and police statements about the DNA match.

Williams' case will be sent to prosecutors for possible charges after police detectives finish their investigation.

Williams, who according to court documents is prescribed a cocktail of mental-health medications, roamed the streets of Capitol Hill, apparently homeless around the time of Harps' slaying. He had been arrested in September for possessing a knife.

The night of the slaying, he was interviewed by detectives near the crime scene and voluntarily provided a DNA sample, police said.

"We certainly know he has a history of violence," Deputy Chief Clark Kimerer said during a news conference. "He was in the area [on the night of Harps' slaying]. A short distance from the homicide."

Corrections officers who were supervising Williams had recommended to mental-health authorities that Williams be involuntarily committed to a psychiatric hospital, but that was not acted on after his release from prison last January, a source familiar with the investigation said.

The Department of Corrections (DOC) designated him a Dangerously Mentally Ill Offender, requiring extra oversight by community corrections officers. He was receiving medication and treatment from Sound Mental Health,

Williams, diagnosed with paranoid schizophrenia, has a history of mental illness dating to his teenage years in Arkansas, according to court records.

He was first convicted in 1976, at age 16, for burglary in Arkansas, and served a three-year sentence in Texas for check forgery. While in prison there in 1989, he was treated for a self-inflicted knife wound, and told a psychiatrist that he was being "bombarded" with microwave radiation, according to a psychiatric evaluation in his 1995 King County court file.

His delusions worsened after his release. He admitted to using speed and hallucinogenic mushrooms, but refused to take psychiatric medications after claiming to be transformed into a "monkey" while being treated with Haldol, an anti-psychotic medication.

He consistently resisted treatment, and once told a psychiatrist he carried a knife and kept a loaded gun beside his bed because he feared God and the devil were "out to do him harm."

Convicted in a shooting

His criminal record includes convictions for burglary and felony theft in Arizona, drug use in Texas, assault and battery in Oklahoma and three aggravated-assault convictions in Florida.

In 1995, Williams was arrested in Seattle after shooting a man at a bus stop on Second Avenue and Union Street, according to court documents.

He then fired three rounds, striking one of the men in the hand and grazing his head, police reported. Williams was caught in an alleyway a short distance away attempting to change clothes, court documents indicate.

Williams reportedly told his attorney that he fired in self-defense, that the man had taunted him. His attorney argued in court documents that Williams' belief that he was provoked "would appear to be delusional in view of the facts presented."

A police report after the shooting includes a warning written in capital letters and punctuated with exclamation marks: "DO NOT RELEASE!!! SUSPECT SHOT A STRANGER WITH A LARGE CALIBER PISTOL. THE SUSPECT IS A DANGER TO ALL CITIZENS. NO TIES TO COMMUNITY."

Williams was convicted of assault and sentenced to prison. He was released from the Monroe Correctional Complex last January. He was ordered to get mental-health treatment after his release.

Over the past two years Williams has regularly shown up for meetings with probation officers and complied with court orders, according to the DOC. But on Sept. 24 he was arrested for possession of a deadly weapon, a knife. Williams was sentenced to 60 days in jail.

He had been slated to come off probation on Dec. 13.

Williams and his sister were raised by several of their mother's relatives after she died, according to his aunt, Marilyn Walker, of Camden, Ark.

"His mother died when he was just a little boy and he had a nervous breakdown," she said. "It always seemed like there was something wrong with him after that."

His father had been in and out of trouble, Walker said, and one day he disappeared and never came back.

Williams was taunted and picked on by some in their small town, but he liked people and music back then, she said. He did small jobs and enjoyed working as a retail clerk, she said.

When he was in his midteens, she said, he began drawing Social Security and then left town, Walker said.

Court documents indicate that while he worked short stints as a painter, wallboard hanger and oil-field worker, he was typically unemployed.

Managers at Williams' apartment building, The Curben, in the 1700 block of Summit Avenue on Capitol Hill, said he moved in Jan. 4, after the Harps attack, when he was referred from Sound Mental Health.

The managers said nighttime security at the building hadn't reported any problems with Williams during his short stay.

"He came after the fact and now he's gone," said Scott Tisland, a manager at the building.

Before that, Williams lived at the Arnold Berkley House on East Union Street in Capitol Hill, less than a mile from Harps' building. That's where police were called before his arrest for knife possession in September.

Brady Montz, a friend of Harps' and the Seattle chairman of the Sierra Club, attended the police news conference Friday, and learned firsthand about Williams' arrest. He described Harps as one of the "best people" he had ever known.

Montz said he was relieved to hear that an arrest had been made and was not surprised that police now believe she was killed by a stranger.

"I would have been surprised if it was someone she knew," he said.

Outside Harps' apartment building Friday night, the memorial dedicated to her had grown with the addition of candles and flowers. Behind them, a sign from the Sierra Club read: "Here's to Shannon, with love."

James A. Williams served time for shooting a stranger at a downtown bus stop. (COURTESY WA DEPT. OF CORRECTIONS)

Shannon Harps worked as an organizer for the Northwest region of the Sierra Club.