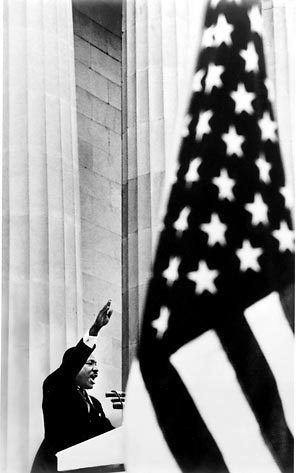 The Civil Rights Act of 1964 gave Negroes some part of their rightful dignity, but without the vote it was dignity without strength.

Listen — and you'll hear the words of a man who was more than just an orator. Listen, and in those words you'll hear not only yesterday's struggles but the challenges of today.

Nearly 43 years ago, Dr. Martin Luther King Jr. delivered a speech under the most trying of circumstances, forging rays of hope amid tragedy and strife of landmark resonance. On Monday, the Central District Forum for Arts & Ideas (CD Forum) will present "Our God Is Marching On," a staged reading of that speech, at Seattle Center's Center House Pavilion.

The reading is the fifth in an ongoing partnership between the CD Forum and Seattle Center's annual holiday celebration. Past readings have included King's most famous speech, "I Have A Dream," as well as his Nobel Peace Prize acceptance speech.

Through his words, a much broader picture of King emerges, showing a civil-rights leader who, steeped in the African-American church experience, addressed issues ranging from segregation and poverty to nuclear proliferation and the Vietnam War.

"All of those issues are relevant today," says Timeca Briggs, director of Monday's stage production. "We saw in the last couple of elections problems with voting, with who gets to vote and who doesn't. ... So this is the time for this speech."

By March 1965, the nation's new Civil Rights Act was on the books. But parts of the South were slow to embrace such a paradigm shift. In particular, in Selma, Ala., African Americans faced corruption, intimidation and gerrymandering on their way to becoming registered voters.

Early that month, two weeks after the assassination of Malcolm X in New York, King and more than 500 demonstrators left Selma on U.S. 80 en route to the state capital of Montgomery to tell Gov. George Wallace their rights had been infringed.

But six blocks away, at the Edmund Pettus Bridge, state troopers and sheriff's officers attacked the group with bull whips and tear gas.

Prompted by media coverage of the assault, supporters from around the country descended on Selma two days later for a second try. But when King agreed to abide by a federal restraining order, the 2,000-plus marchers made the march purely symbolic, once again halting at the bridge.

That day, after the curtailed demonstration, James Reeb, a Unitarian Universalist minister who had traveled from Boston for the march, was attacked outside a Selma bar. He died two days later.

On March 21, King and thousands more took to the road again. For four days and 54 miles, they braved pouring rain, roadside naps and "trying hills," finally arriving in Montgomery, a place often called "The Cradle of the Confederacy." There — like Jonah in the belly of the whale, as one historical account put it — King faced an eventual throng of 25,000 from the capitol building steps.

They told us we wouldn't get here. And there were those who said that we would get here only over their dead bodies, but all the world today knows that we are here and we are standing before the forces of power in the state of Alabama saying, "We ain't gon' let nobody turn us around."

They were here to talk about voting rights.

But King saw the injustice they faced was rooted in the post-Civil War period, and he took his listeners there with him, giving focus to a speech at once broad and epic. "There were no laws segregating the races then," King noted. But "toward the end of the Reconstruction era, something very significant happened," he said. Segregation became a weapon used by Southern business interests threatened by the Populist Movement that had united both poor whites and African Americans.

If it may be said of the slavery era that the white man took the world and gave the Negro Jesus, then it may be said of the Reconstruction Era that the Southern aristocracy took the world and gave the poor white man Jim Crow. ... And when his wrinkled stomach cried out for the food that his empty pockets could not provide, he ate Jim Crow, a psychological bird that told him that no matter how bad off he was, at least he was a white man, better than the black man. ...

And his children, too, learned to feed upon Jim Crow, their last outpost of psychological oblivion.

This is a Dr. King many may not recognize. That's what CD Forum director Denee McCloud sought when she chose this year's production.

"I wanted something people had not heard," she says. "This was a culmination of so many things that were going on. ... He goes into so many things — where racism comes from, why we are here at this place. He talks about it in terms of class, of voting rights — which we're still dealing with. There's still people being disenfranchised. So in that way, I thought the speech was very powerful."

Stage director Briggs and her six cast members aim to capture the speech's religious rhythms, the call-and-response cadences King built his prose upon. The passage above, with its potentially controversial linking of religion to oppression, gave them chills.

"How very revolutionary and forward-thinking," Briggs says. "How out of the box. He was just heroic. Somebody could read that as blasphemy — but he was courageous enough to be honest about the role that religion played."

Reaching out for unity

They were on the move now.

Today I want to say to the people of America and the nations of the world, that we are not about to turn around. We are on the move now.

Like an idea whose time has come, not even the marching of mighty armies can halt us. We are moving to the land of freedom.

Despite the unnatural divisions King said had led to their circumstances, the speech breathes with hope, which production members say still resonates today. "Though he goes to some really radical places in the speech, he always comes back to remind his audience that the goal is not to divide, but to connect," says actor Lin Lucas.

Briggs says she hopes it inspires people to think and act differently. "That's what I hope to do with all my art," she says. "At the end of the speech, he talks about that great day, not of the white man or the black man, but of man," she says. "He's still holding out hope. ... He's talking to all people, saying, we can come together. And that hope is always relevant."

A seemingly inconceivable task. King knew his weary followers would ask: How long?

How long? Not long, because "no lie can live forever."

How long? Not long, because "you shall reap what you sow."

... How long? Not long, because the arc of the moral universe is long, but it bends toward justice.

In his conclusion, McCloud says, King offers nothing less than a spiritual call to action. "He's taking us and shaking us and saying, 'Listen, people — we've been on a long march where we've been physically attacked. We're pushing though a certain moment. It doesn't matter that the Civil Rights Act just passed — look what's happened here.' People were tired."

The battle, as he said, was in their hands. Against the current backdrop of an oft-divided, election-minded nation, the speech's relevance remains.

Listen, King was saying. Listen. And in doing so, he invoked a song with spiritual foundations but whose lyrics carried a powerful, universal reach.

How long? Not long, because:

Mine eyes have seen the glory of the coming of the Lord;

He is trampling out the vintage where the grapes of wrath are stored;

He has loosed the fateful lightning of his terrible swift sword;

His truth is marching on.

Within five months, President Johnson had signed the Voting Rights Act of 1965.