Cindy Potter and other members of her community group donned orange reflective vests and braved Tuesday night's chill to walk along Aurora Avenue North in search of prostitutes or other criminal activity, but the worst thing they encountered was a burned-out street light.

It was a far cry from just a few years ago, when Seattle police logged nearly 1,000 911 calls in a year about prostitution or drugs along the heart of the Aurora Avenue North corridor.

Thanks in part to efforts by Potter's group as well as a stepped-up police emphasis, dispatchers received only about 215 such calls last year.

"We literally flipped the switch on in 2005 and have never turned it off," said Capt. Mike Washburn of the police's North Precinct. "I'm amazed we have been able to impact it so much. It's just been there so long."

For the past two years, police have targeted the Aurora corridor from North 84th Street to North 105th Street with undercover stings and by monitoring activity at the motels that line the highway.

Washburn credited those efforts as well as the regular patrols and monthly trash cleanups by the nearly 400 members of Potter's group, Greenwood Aurora Involved Neighbors (GAIN), with bringing about the drastic reduction in 911 calls.

Lt. Mike Nolan, who runs the Seattle police's vice unit, said that 15 years ago officers could find more than 20 prostitutes walking Aurora on any given night. Now, he says, "you'll be lucky to see two."

Aurora Avenue, as well as the rest of Highway 99 stretching from Everett to Kent, has for years been frequented by prostitutes. The stretch of roadway that Washburn has had his officers focus on — home to low-rent motels and multiple lanes of traffic — has long been the heart of the prostitution problem in Seattle.

But the two years of constant police pressure apparently haven't forced prostitutes to move north to Shoreline, according to Shoreline police. And Seattle police said they've seen no corresponding increase in prostitution in other parts of the city.

Another possible reason for the decline is that many prostitutes have left the streets and are now advertising their services on Craigslist, Nolan said. Detectives now find themselves investigating some of the online ads to break up prostitution operations.

"I don't know if prostitution is on the decline," Nolan said. "It's all how it's packaged. It's on the Internet."

The drop in drug and prostitution calls along the targeted stretch of Aurora comes as police in Seattle and many other cities across the state have seen an almost across-the-board drop in most crimes in 2007 compared with 2006, according to statistics compiled by the FBI. In 2007, crime in Seattle was the lowest it has been in nearly 38 years, said Deputy Chief Clark Kimerer.

Seattle Mayor Greg Nickels and Police Chief Gil Kerlikowske are expected to release detailed information about the city's 2007 crime rates during a news conference this afternoon.

Potter, 41, the mother of two small children, has become an unlikely expert in spotting prostitutes and drug dealers.

During most of her 10 years living a half-block off Aurora near North 81st Street, Potter said she ignored the women she frequently saw shuffling up and down the street. She got involved upon hearing about a neighbor who was beaten unconscious after confronting someone who he thought was dealing drugs.

In November 2005, more than 400 Greenwood-area residents crammed into a local elementary-school cafeteria to complain to police, prosecutors, City Council members and officials from the mayor's office about drugs, prostitution, theft, burglary and vehicle prowls.

GAIN had formed a few months before that.

Potter said she went from belonging to a block-watch group that met once every summer to being an active member of GAIN who communicates with fellow members via e-mail several times a day. She said GAIN has been referred to as "block watch on steroids," and has even resulted in two spinoff groups — GAIN Greenwood North and GAIN the Highlands.

Walking north on Aurora, in an area where police say drug deals and prostitution used to be frequent, Potter and GAIN members are far from intimidated. They talk easily about families, work and neighborhood improvements they would like to see.

Each member has a different story about crimes they've witnessed while living in the neighborhood. Potter said that when she encountered a prostitute and a customer in a truck parked in front of her house about 1-<133>½ years ago, she was berated by the woman after ordering them to leave.

Chris Porter, who lives near Aurora and North 85th, said that before GAIN was started, she saw cars pull in and out of the subsidized housing complex across the street all day long for what police have said were drug deals. She said the traffic out of the complex has slowed with increased police presence and the GAIN patrols.

Until last summer, GAIN members patrolled Aurora and nearby streets religiously once a week. Dressed in their orange vests and GAIN baseball caps, members watch for crime. When they see suspicious activity, they call police.

GAIN members said they noticed the biggest change in criminal activity in the fall of 2006 after they convinced the owners of a convenience store near North 85th Street and Aurora to remove a bank of phone booths frequented by prostitutes and drug dealers, Washburn said.

"The next day it was dead and quiet there," Potter said.

Since last summer GAIN members have dropped their weekly walks and now hit the streets about once a month.

North precinct Sgt. Angela Gordon said the "shock and awe campaign" the department started on Aurora at the end of 2005 is scaling back.

"I think we have control of as much of it as we can," Gordon said.

She also attributes some of the department's success to a program that allows motels to forbid certain people from returning. If caught on the premises they can be arrested for trespassing.

Washburn said businesses can refuse service to anyone, but by signing the trespassing agreement with police the motels can keep the person off the property permanently. 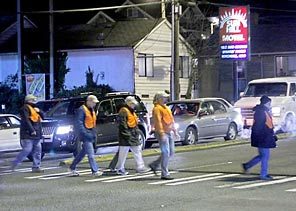 Members of GAIN who were out on patrol Tuesday night cross Aurora near North 85th Street. (JIM BATES / THE SEATTLE TIMES) 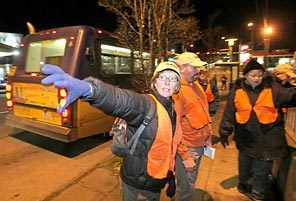 Cindy Potter points out a spot that the Greenwood Aurora Involved Neighborhood (GAIN) group cleared to help discourage drug dealers and prostitution. Calls to police about prostitution and drugs have dropped significantly since GAIN started its patrols and police increased their presence. (JIM BATES / THE SEATTLE TIMES)