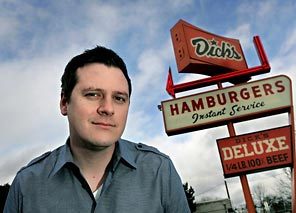 Luke Burbank's new talk show is a bit of a departure from "typical" AM radio &#8212; "I'm going to hang out with my friend and talk about things," Burbank says &#8212; and that's the whole point. (KEN LAMBERT / THE SEATTLE TIMES)
By Florangela Davila
Seattle Times staff reporter

If there's something to be said about the cultural supremacy of "The Karate Kid," expect radio broadcaster Luke Burbank to pull a Mr. Miyagi and wax on about the flick. To applaud Celine Dion and pity (sort of) Britney Spears. To wonder if things are ironic or merely coincidence and to, well, act like a girl and fret about his weight. (Burbank is 6 feet tall, 183 pounds and unabashedly vain.)

He's also garrulous, genial, funny, smart-alecky and, if you're News Talk 710 KIRO — coveting Gens X and perhaps Y — desirably young. The station has snagged 31-year-old Burbank, who recently left a co-hosting job at National Public Radio, and bequeathed him his own gig. Burbank's nightly three-hour talk show launched Monday in the 7-10 p.m. slot, once New York Vinnie's and, most recently, Mike Brown's. And the clearest signal that this new show will be anything but your usual blowhard/self-help/sports-booyah-talk-radio banter is its title: "Too Beautiful to Live."

"There were other show name ideas, like 'Catch My Disease with Luke Burbank,' " he quips.

"But 'Too Beautiful to Live.' T.B.T.L. ... You have to treat it [the show] like it's a firefly and you've put it in a jar and it's flickering," says Burbank about the aural treasure he hopes will be longer lived than a captured glowing insect. (And yup, the catchy Ben Lee "Catch My Disease" tune — My head is a box filled with nothing/and that's the way I like it — is the show's theme song).

Those who tune in will find plenty of navel gazing, including that obsession about Burbank's waistline. Burbank and acting producer Jen Andrews (also a hipster 30-something) have proposed daily weigh-ins that will be recited on-air.

Other scheduled segments include something called "Defend Yourself!," in which Burbank challenges someone's particular penchant. Such as the driver of an especially ugly, red, low-to-the-ground, fuzzy-dice-hanging-from-the-rearview-mirror vehicle that Burbank spots from an Azteca restaurant where he lunched recently.

And speaking of Azteca — "What's up with waiters who don't recognize the regulars?," Andrews chimes in. She's a loyal side order of chicken enchiladas, please, but recently a waiter looked at her obliviously.

Definitely worth exploring on the program, host and producer agree.

Why waste airtime talking about the viaduct?, the pair asks. Why bother regurgitating the day's headlines?

"I'm not into news you can use," Burbank explains. "I don't like happy talk or the stuff that TV newscasters say to one another. I just think so much of what happens [on the air] is fake. I'm not about finding 'the local angle' on some issue or manufacturing outrage. That's being done. We don't have to add to that."

Rather, Burbank says, he's way more interested in real, regular people. A live remote on a Friday night from a bowling alley! "And we could just read off people's scores!," Burbank exclaims, clearly delighted with his idea.

Fans across the dial

This departure from typical AM radio was hinted at back in August, when KIRO, newly acquired by Bonneville International, ousted Vinnie and host Ron Reagan in a significant programming move. Dori Monson moved to a slot following Dave Ross. Afternoon news anchor Tony Miner got a new show and the freedom to go longer on stories. And management kept promising something new and different at 7 p.m. (The Wednesday-evening "Seahawks Huddle" show remains for as long as the Seahawks remain in the playoffs. So tonight will be a mash-up. TBTL Hike!, perhaps?)

New and different? Enter Burbank, who grew up near Green Lake, graduated from Nathan Hale High School and the University of Washington and once did stand-up comedy. He has forged an enviable broadcasting career: jobs at KVI-AM, Metro Traffic and KUOW-FM; reporter on the national desk for National Public Radio; substitute host for NPR's addictive quiz program, "Wait Wait ... Don't Tell Me!" for a year and a half.

"I was skeptical at first because I didn't know his work," Peter Sagal, "Wait Wait ... " show host, says about Burbank substituting. Sagal took a leave from his show in 2006 to finish writing a book. "But everyone kept vouching for him and we had him on as a panelist, and he totally won me over. He's funny, he's fast, he's interesting and he's fearless about putting himself out there. He's also one of those people, I think, who is able to be genuine in a very artificial environment."

Bill Radke, the public radio "Weekend America" co-host, also vouches for Burbank's talent. They met working at KUOW on Radke's "Rewind" show and remain close friends. "He's the funniest person I know. People came to my wedding and they remember him more than the ceremony," Radke says from Los Angeles, where he now lives.

"Luke's brain has horsepower like nobody I know. He just knows what's going on, and that's what riffing is. You reference this over here and this over there and you wing it and you crack people up. You don't know what he's going to say next."

Such skills helped vault Burbank last October to co-hosting NPR's "The Bryant Park Project" (or "BPP"), a news program clearly aimed at the Gawker/TMZ/Pitchfork crowd. Burbank moved from Los Angeles to Brooklyn and began working wickedly early hours (starting at 4 a.m.) on a national show that balanced the serious (a man transgendering into a woman), the light (the return of Duran Duran) and the goofy (Burbank playing Ping-Pong with Mike Huckabee ... available on YouTube).

But Burbank wasn't happy, and he quit two months later, saying he was too far away from his 13-year-old daughter, Addie, who lives in Seattle with her mother. Burbank became her father at age 17. The parents never married and have remained good friends.

So Burbank returned to Seattle sans job, although no one in local radio circles is surprised he found work so quickly.

"He's a great young talent. He understands radio, and he speaks well for that age group and for people who are just tired of all that acrimonious partisanship," says Michael Hood, who chronicles local talk radio on www.BlatherWatch.blogs.com.

Talk radio currently speaks to an older, white male demographic. Experimenting with someone like Burbank, Hood says, is nothing but smart.

Burbank and producer/sidekick Andrews, 35, go way back. He once dated her younger sister, and Andrews can still recall some party when they were in their 20s and Burbank did some interpretive dance to a Jefferson Starship song.

"And I can also remember having this long epic conversation with him about pop culture," she adds.

Andrews, who used to produce KIRO's "Ron & Don Show," had long wondered what it would be like to do a show where the talk focused on things she was interested in. The joy that is the music of Bananarama, say. Burbank too talks about the freedom that was missing when he worked for NPR. Fifteen producers. A tight schedule. Doing segments he just wasn't that into. "There was all this money on the line and then people were just messing with you so much," he says about "BPP."

Andrews pitched the show and Burbank to KIRO, which snapped him up and has thus far given him a long leash. The show's title, for example. "People in HR kept asking me if it was for real," Burbank says.

He acknowledges his show might raise the eyebrows of some regular KIRO listeners. He realizes the unique radio world he's hoping to create might not suit everyone. He admits he doesn't have the choicest of time slots.

But he's hanging out with his daughter, settling into his North Capitol Hill apartment, devouring Dick's and Taco Time whenever he wants to — and he isn't worried one bit.

"I'm going to hang out with my friend and talk about things, and I've never been more excited about a radio job." 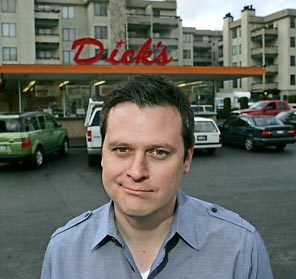 Luke Burbank left National Public Radio in New York to return to Seattle, and a new talk show called "Too Beautiful To Live" on KIRO Radio. Before his success in radio, Burbank worked at this Dick's just off Lake City Way Northeast. (KEN LAMBERT / THE SEATTLE TIMES)

Shiers will remain at KIRO as a fill-in host and will continue hosting his weekend show on KBSG Oldies, B97.3-FM.