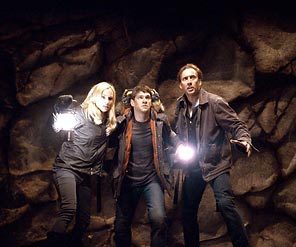 Almost in spite of itself, "National Treasure" defied sniping critics and became one of the surprise blockbusters of 2004, combining family-friendly popcorn thrills with an enjoyable blend of Hardy Boys mystery, Indiana Jones adventure and ludicrous plotting. As a newly minted franchise from über-producer Jerry Bruckheimer, it was "The Da Vinci Code" for the PlayStation set, promising multiplatform merchandising and a sequel mandated by the success of its opening weekend.

Perhaps that explains why "National Treasure: Book of Secrets" feels like it was made out of obligation to Disney stockholders, as opposed to springing from anything resembling inspiration. From start to finish, this lavish, nonsensical product of Hollywood greed betrays the creative ennui of everyone involved. Their paychecks were obviously generous; there's no other explanation for watching talented people embarrass themselves so badly.

And so it is that we find the likes of Ed Harris, Jon Voight and Helen Mirren (yes, "The Queen" herself) tumbling around in a cavernous catacomb with fellow Oscar-winner Nicolas Cage, as they discover a massive Native American city of gold hidden in the bowels of the Black Hills, under the gaze of the faces on Mount Rushmore.

According to the movie's by-the-numbers logic, that setting is historically significant: The so-called "Book of Secrets" is known only to U.S. presidents and contains the mother lode of state secrets, from the truth about JFK's assassination to the cover-up at Area 51 and the location of the aforementioned city of gold. For intrepid treasure-seeker Benjamin Franklin Gates (Cage, looking desperate for a hit), the book holds the key to restoring his family's reputation, smeared by an allegation that Gates' great-great grandfather was a conspirator in the Lincoln assassination.

The movie's convoluted hide-and-seek plot also demands a White House break-in that makes about as much sense as subprime mortgage rates, but that doesn't stop Gates and his reunited sidekicks (Diane Kruger and Justin Bartha) from staying a step ahead of a villainous treasure-stealer (Harris), who's got his own reputation to repair.

Perhaps the clearest indication of creative bankruptcy is the contrived climax involving a massive tilting platform, upon which our heroes must delicately balance themselves or fall to their certain deaths down a seemingly bottomless chasm. This idea is blatantly stolen from the Oscar-winning West German animated short "Balance" (1989), which packed more cleverness, suspense and substance into seven minutes than this bloated arcade game can muster in two mindless hours.