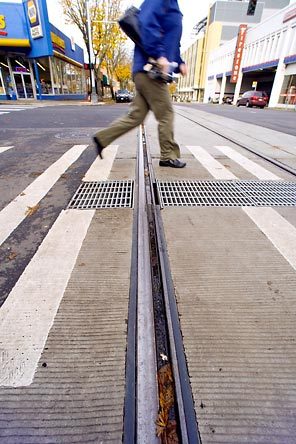 Cyclists worry their tires will get stuck in the rails of the South Lake Union streetcar such as in this section along Westlake Avenue North. (MIKE SIEGEL / THE SEATTLE TIMES)
By Mike Lindblom
Seattle Times transportation reporter

New streetcar tracks on Seattle's Westlake Avenue have turned into a trap for bicyclists.

The tires on a standard road bike are narrower than the 1 ¾-inch groove that holds a streetcar wheel. If a bicycle veers into that gap, it can easily get stuck, pitching the rider onto the street.

Despite the goal of Mayor Greg Nickels to triple bicycle use, the new streetcar line includes long stretches of track in the curb lanes of Westlake Avenue, where bicyclists normally ride. Many riders have adapted by riding on sidewalks, to the left of the tracks — or in the left lane, which aggravates motorists.

Stacey Merrick said she was pedaling north on Westlake two weeks ago, in the curb lane but just left of the rails. She felt pressure from passing cars, drifted right, and became snared in the trackway.

"I had two options: fall into moving rush-hour traffic, or slam into the back of a parked car. I opted for the parked car." She got up, bruised and bleeding, then noticed her body broke the car's taillight. Merrick said she no longer rides there.

"Any time there's a bicycle around, we're extra cautious," said Paul Warner, a streetcar operator for King County Metro Transit. Warner said he has seen a couple of cyclists fall during train testing and that he allows extra stopping distance behind bicycles in case one gets pitched.

Sound Transit's Tacoma Link light rail runs mainly along a center median, but Seattle's new streetcar is mostly in curb lanes, so passengers can board from the sidewalk. It's a cheaper alignment, in a neighborhood where Vulcan and other landowners are covering half of the project's $51 million cost.

Ethan Melone, the city's streetcar project manager, said the main issue wasn't price, but that a center layout would have required a wide median, forcing out road lanes or parking spaces.

The city intends to add bike lanes to nearby Ninth Avenue North, and shift Westlake cyclists there. But that's not expected for at least another year, said Snyder.

Protest organizers ask that the bike route on Ninth Avenue be built immediately; that warning signs be installed on Westlake; and that the city study putting rubber fill in the rail grooves.

The Cascade Bicycle Club will advocate that any future streetcar lines take inside lanes or medians — a provision Portland added to its bike plan.

"We'd be happy to look at any ideas that cyclists may have," said Melone. "At the same time, it's a multimodal system."

Alan Durning, founder of Sightline Institute, an environmental think tank, calls the Westlake situation one example of "bicycle neglect" — the American tendency to treat bikes as recreational vehicles, not primary transportation. A street posing similar hazards to cars would never be designed, he said.