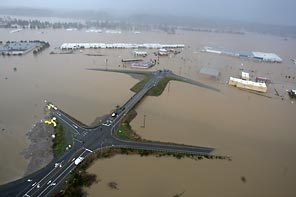 New buildings west of I-5 at Chehalis, including a Wal-Mart (upper right), were inundated by water. Some people believe the development exacerbated the flooding. (STEVE RINGMAN / THE SEATTLE TIMES)
By Hal Bernton and Ralph Thomas
Seattle Times staff reporters

Interstate 5 near Chehalis will remain closed until this weekend and possibly longer, the state Department of Transportation said today.

DOT officials said a mile of the freeway is still under water and inspectors found damage to the pavement that must be repaired before it can reopen.

I-5 has been closed since Monday, when heavy rain drove the Chehalis River over its banks and left parts of the road under 10 feet of water.

Gov. Christine Gregoire this morning said the storm caused an unprecedented amount of damage that's likely to run into billions of dollars.

"I can't imagine it's something short of billions based on what I saw," said Gregoire, who flew over some of the hardest hit areas Tuesday.

The governor's office is still struggling to figure out the scope of the disaster. It remains unclear, for example, how many people have been displaced, are without water or are still stranded. And there are no figures yet on the number of homes that have been damaged or destroyed.

One bright note: The weather has calmed enough to allow road crews to reopen most of the roads that were closed because of mudslides and flooding. Transportation Secretary Paula Hammond said 40 roads have been reopened, including Highway 12 into Aberdeen. Twenty roads remained closed.

The fill under the I-5 washed away in an area between the Highway 6 interchange and the West Street overpass, according to Randy Bateman of the state Department of Transportation.

Working with the Washington State Patrol and local communities, the state has started to allow trucks carrying emergency supplies and extremely perishable goods to use nearby State Route 7, a much shorter alternate route, on a case-by-case basis.

When the freeway is open, more than 54,000 vehicles travel the affected stretch of I-5 daily, and almost 10,000 of those vehicles are trucks.

The Chehalis River crested at Centralia shortly after midnight and is expected to recede below flood stage by this evening.

But while the river is dropping, Robert Scott, fire chief of Thurston County Fire District 1 in Rochester, said the floodwaters are slow to recede.

"In the past, it almost dropped off as fast as it rose," Scott said. "That's not happening. It's taking time for the water to find its way through places that haven't seen water for 500 years."

Meanwhile, communities downstream were bracing for their own battle with the floodwaters. Near Elma and Monsanto, places that were high and dry on Tuesday were under water today.

The floodwaters that forced the Chehalis River out of its banks upstream were expected to hit Aberdeen about midnight tonight — about the same time as high tide.

"I'm not anticipating any flooding occurring as the peak comes through," Bledsoe said.

Two deaths in Grays Harbor County and one in Mason County were blamed on the storm.

In Lewis County, a dive team planned to search normally tiny Wallers Creek today for an 81-year-old man believed to have been swept away when a bank gave out from underneath him.

A round-the-clock marathon of rescues continued through Tuesday, with helicopter, boat and truck teams picking up more than 360 people across the county by nightfall.

Some of the most desperate situations unfolded in the upper reaches of the Chehalis River, which flows east out of the rugged Willapa Hills. The rising water decimated homes in Pe Ell as well as other smaller towns and homesteads.

"All you can see is just the peaks of the roofs ... It's hard to comprehend," said Gregoire, who toured the upper valley by helicopter Tuesday.

Some families hunkered down through the worst of the flooding.

Tracy and Laura Strickland built their house near Adna, 2 feet above what they thought was the 100-year floodplain. When the water rose Monday night, they retreated to the second story as logs pounded their home and punctured propane tanks hissed with leaking gas.

They were picked up by a rescue truck Tuesday morning.

Josh Rhoades, 27, of Centralia, said he waded through chest-deep water to rescue an elderly woman. He was unable to get her out of the house, but a high-water rescue truck stopped and took the woman to safety.

On Tuesday, Rhoades was back as part of a neighborhood rescue team that deployed a small rowboat to retrieve belongings and rescue another elderly woman and her tiny white poodle marooned by the floodwaters.

The flooding surrounded much of the recent development along I-5, which includes a Wal-Mart, Home Depot and others.

Some residents believe the development may have helped divert the floodwaters in new directions — and toward homes.

"A lot of people are complaining because they raised the ground in that area," said Agnes Swanson, a longtime Lewis County resident.

Merlin MacReynold, Chehalis city manager, said the development complied with all state and federal regulations, but acknowledged there has been an ongoing debate about the construction.

Gregoire said the development issue would be reviewed.

Many businesses along the freeway are cut off and closed by floodwaters.

Jane Bates and Linda Dotson were wondering about the fate of their store, Deco Gifts and J.C. Penney Catalog. The holiday season is their peak period for business, and they wondered if the flood had destroyed some $4,000 worth of gifts baskets they had prepared.

"It could break us," said Bates, who added that she had her store in the downtown city center for 20 years, before moving out to the Twin City Town Center Mall to be closer to freeway traffic. She moved to the new location about three years ago.

She said they were unable to get flood insurance because of the construction in a flood plain, but they said it seemed like the mall was on high enough ground to be safe.

In southwest Thurston County near Rochester, Mary Earrame said she was taking a shower about 8 a.m. Tuesday when muddy water began bubbling up from the drain. She looked out and saw the house was surrounded by water.

After waking her husband and their 9-week-old baby, they called 911 for help. By the time rescuers arrived in a boat, the water was coming into the upper level of their home. "It was pouring in through the heater vents," Earrame said.

The family was taken to a makeshift shelter at a nearby church. Earrame said they saved their two dogs, including a chow mix that she had brought back from a weeklong pet-rescue mission in Louisiana after Hurricane Katrina. But she worried that her three-legged cat, which was trapped in the garage, might not have survived.

"We lost everything," Earrame said, fighting back tears as she looked down at what she feared was all that was left of their belongings — a few bags of clothes, some diapers and a car seat for the baby.

In Grays Harbor County, residents were cleaning up from what most described as the worst windstorm they'd been through.

"It was like a freight train, and it just wouldn't stop," said Paula Reisman, a lifelong Aberdeen resident. "Our whole house was shaking."

But some essential businesses were still serving customers. At the Crown Drug store in Hoquiam, which was running two small lights on a generator, store manager Alice Bertram was wearing a headlamp as she filled prescriptions. "We're a life-sustaining business, so we have to be here," Bertram said.

The hospital in Aberdeen, which went on emergency power Monday, had to go to emergency lockdown Tuesday because so many people were seeking shelter there. The county has set up five shelters.